Titles of Luisa for August 1

In the Most Holy Divine Will make this special plenary indulgence known to those on your email list!

Please make plans on August 2, to attend Holy Mass, receive Communion, and then go to the Sacrament of Confession –  eight days before or after Aug. 2

The conditions to obtain the Plenary Indulgence of the Forgiveness of Assisi is (for oneself or for a departed soul) is as follows:

The Portiuncula Indulgence is a grace not to be missed—not only for yourself but for the many suffering souls in Purgatory. …

Sacramental Confession to be in God’s grace (during eight days before or after.) …

Participation in the Holy Mass and Eucharist …

Recitation of The Apostles Creed, Our Father and also a prayer for the Pope’s Intention (such as an Our Father, Hail Mary, etc.).

Mark your calendar for the Feast of Our Lady of the Angels beginning at Vespers (Noon) on the First of August to August 2nd at Midnight.

Tell everyone of the magnitude of this gift.

Once again, we see the unfathomable Divine Mercy of God.

The plenary indulgence granted by the Pope in 1216 to the Portiuncula, a lowly Franciscan chapel outside Assisi — the so-called Portiuncula Indulgence — is remarkable in church history. As with most things associated with the life of St. Francis of Assisi (c.1181-1226), the episode turned the church’s indulgence system on its head. The new pope, Honorius III (1150-1227, reign 1216-1227), who followed the powerful and influential Pope Innocent III (reign, 1198-1216), was asked by St. Francis himself for the plenary indulgence linked to the Portiuncula, the one-room chapel given to the Franciscans and the central place for many of their founder’s most profound religious experiences. 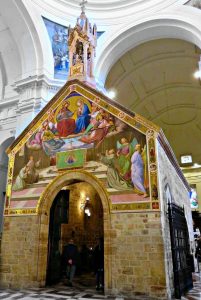 The Portiuncula (or “Little Portion”) is a 9th century chapel given to the Franciscans by local Benedictine monks. It was here that St. Francis of Assisi received his calling to be a mendicant or beggar following in the footsteps of Jesus Christ. Since the mid-17th century it has been enshrined within a massive basilica in Assisi called Santa Maria degli Angeli (“Our Lady of the Angels”).

Honorius III listened to the little poor man Francis and expressed extreme reluctance to grant his request. How could the mighty church bestow its fullest plenary indulgence on an obscure, rundown 180 square foot chapel when a holy place such as that might normally receive only a partial indulgence? Churches, usually at their dedication, would gain a partial indulgence of days or perhaps a year or two. The Portiuncula Indulgence which begins each year at sunset on the evening of August 1 and extends until sunset of the following day, is a plenary (or lifetime) indulgence that was approved at the highest levels of the church by virtue of St. Francis of Assisi’s bold request. The saint always insisted it was not he, but Jesus Christ Himself who was asking for the plenary Portiuncula Indulgence.

Francis’s request to the pope who was holding court in Perugia was a bold one. The pope greatly hesitated; then assented. The cardinals and the Curia—as well as the local bishops—were opposed to the idea of a plenary indulgence for the Portiuncula. Francis’s “Little Portion” was just that and unworthy of the church’s fullest indulgence especially as an international banking system was watching and to which the church had become increasingly aligned. Unable to quash outright the Poverello’s request with its papal approbation, the cardinals and Curia worked successfully to limit its temporal parameters– allowing the plenary indulgence for the Little Portion to work for the littlest of time -– namely, one day a year, from the sunset of August 1 to that of August 2. This has remained its arrangement for more than 800 years.

St. Francis Receiving Confirmation of the Franciscan Order from Pope Honorious III, by Domenico Ghirlandaio (1449-1494), originally in a central position in the Santa Trinita, Florence, Italy. It is housed today at the Piazza della Signoria. The approval of the Franciscan order by Honorius III depicted in this fresco occurred in 1223 which was about 7 years after the Portiuncula Indulgence, This late 15th-century art work provides insight into the almost public event that any papal encounter entailed.

To acquire any plenary indulgence including the Portiuncula Indulgence requires taking action regarding the work to which the indulgence is attached -– in this case, it began with pilgrimage to the Portiuncula in Assisi. It also means fulfilling three more conditions. The applicant must (1) make a sacramental confession, (2) receive holy communion, and (3) pray for the intentions of the pope. To acquire a plenary indulgence also means that not even the smallest attachment to any sin is permitted.

After their meeting in 1216 the pope offered Francis the appropriate paperwork for his extraordinary indulgence but like many times before and on integral events in the life of the Franciscan Order, Francis waved it off. This great saint concluded that even church documents could be superfluous to the actual manifestation of God’s work. 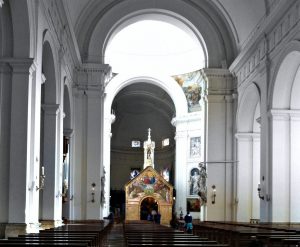 After St. Francis died on October 3, 1226 at the Portiuncula, its plenary indulgence’s lack of a contemporary document and continued animosity from grandiose church figures led early Franciscans to not highlight the privilege. By the 1270’s with the last of the Franciscans who personally knew Francis dying off, those brothers who had been at Perugia in 1216 to witness the Portiuncula indulgence set about making notarized statements attesting to its veracity.

In this first quarter of the 21st century Franciscans and other pilgrims continue to arrive to Assisi in a constant stream as they have since the 13th century. Their visits often include traveling the short distance to the Portiuncula which is the spiritual home of St. Francis and the Franciscan movement, all of which has made a noteworthy impact on world history. But not every visit– especially among 13th century Franciscans– provides easy historical documentation of their witness to the Portiuncula’s plenary indulgence in August. In a certain way, the origin of the Portiuncula indulgence attributed to St. Francis is shrouded in history as much as possibly legend. In 2019 the Portiuncula indulgence is in effect from the evening of August 1-2. In addition to the sacramental requirements, its plenary indulgence may be received by visiting any Franciscan church in the world and that the pilgrim in the spirit of St. Francis of Assisi has that tiny terra sancta called the Portiuncula uppermost in mind so that from that place its graces may flow.

A town and parish situated about three-quarters of a mile from Assisi. The town, numbering about 2000 inhabitants and officially known as Santa Maria degli Angeli, has grown up around the church (basilica) of Our Lady of the Angels and the adjoining Franciscan monastery. It was here that on 24 Feb., 1208, St. Francis of Assisi recognized his vocation; here was for the most part his permanent abode, after the Benedictines (of the Cluny Congregation from about 1200) had presented him (about 1211) with the little chapel Portiuncula, i.e. a little portion (of land); here also he died on Saturday, 3 October, 1226. According to a legend, the existence of which can be traced back with certainty only to 1645, the little chapel of Portiuncula was erected under Pope Liberius (352-66) by hermits from the Valley of Josaphat, who had brought thither relics from the grave of the Blessed Virgin.

Permanent link to this article: https://bookofheaven.org/2018/07/31/august-2-plenary-indulgence-portiuncula-indulgence/