Feast of All Souls Day – November 2

November 2 Message from Our Lady of Medjugorje to Mirjana 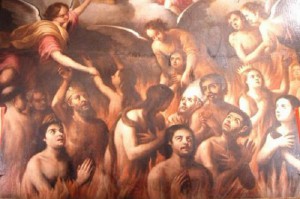 I continue to live all abandoned in the adorable Will; and while I was praying, I thought to myself:  “How I would like to descend into the prisons of the purging souls to release them all, and in the Light of the Eternal Will, bring them all to the Celestial Fatherland.”

At that moment, my sweet Jesus, moving in my interior, told me:  “My daughter (Luisa), the more the souls who have passed to the next life have been submitted to My Divine Will, and the more acts they have done in It, the more Paths they have formed for themselves in order to receive suffrages from the earth.  So, the more they have done My Divine Will, forming for themselves the ways of communication of the Goods that are present in the Church and that belong to Me, there is no Path formed by them that does not bring, to some a relief, to some a prayer, to some a diminution of pains.  The suffrages walk within these royal Paths of My Divine Will, to bring to each one the Merit, the Fruit and the Capital that one has formed for oneself in My Divine Will.  Therefore, without It, there are no Paths and no means in order to receive suffrages.  Even though the suffrages and everything that the Church does always descend into Purgatory, they go, however, to those who have formed Paths for themselves.

“For the others, who have not done My Will, the Paths are closed or do not exist at all; and if these were saved, it is because at least at the point of death they have recognized the Supreme Dominion of My Divine Will, they have adored It, and have submitted themselves to It—and this last act has rescued them; otherwise, they could not even be saved.  For one (Luisa) who has always done My Divine Will, there are no Paths to Purgatory—his Path goes straight to Heaven.  And one who has recognized My Divine Will and has submitted to It, not in everything and always, but in great part, has formed for himself so many Paths and receives so much, that Purgatory sends him quickly to Heaven.

“The more the soul possesses of My Divine Will, the more value her prayers, her works, her pains, contain; and so she can bring more relief to those blessed souls.  I (Jesus) Measure and give Value to everything that the soul can do, according to how much of My Divine Will she possesses.  If My Divine Will runs in all of her acts, the Measure I take is immense; even more, I (Jesus) never stop Measuring, and I put so much Value into it, that its weight cannot be calculated.  On the other hand, if one does not care much about My Divine Will, the Measure is scarce and the Value of little importance.  And if one does not care at all, as much as the soul may do, I (Jesus) have nothing to Measure, nor any Value to give.  Therefore, if they have no Value, how can they bring relief to those souls who, in Purgatory, recognize nothing, nor can they receive anything, but what My Eternal Fiat produces.

“But do you know who can bring all Reliefs, the Light that Purifies, the Love that Transforms?  (Luisa) One who possesses the Life of My Divine Will in everything and in whom It Dominates Triumphantly.  This soul (Luisa) has not even need of Paths, because by possessing My Divine Will, she (Luisa) has the Right to all Paths.  She (Luisa) can go to all points, because she (Luisa) possesses within herself the Royal Path of My Divine Will in order to go into that deep prison, to bring them all Reliefs and Liberations.  More so since, in creating man, We gave him Our Will as his Special Inheritance, and We recognize everything he has done within the Boundaries of Our Inheritance, with that We Endowed him.

“Anything else is not recognized by Us—it is not Our Thing, nor can We allow anything to enter Heaven that has not been done by creatures either in Our Will, or at least in order to do It.  Since Creation came out of the Eternal Fiat, Our Will, jealous, allows no act to enter the Celestial Fatherland that has not passed through Its Fiat Itself.  Oh! If all knew what Will of God means, and how all works, even those that appear to be Good, but are empty of It, are works empty of Light, empty of Value, empty of Life; and works without Light, without Value and without Life do not enter into Heaven.  Oh! how attentive they would be to do My Divine Will in everything and forever.”

Permanent link to this article: https://bookofheaven.org/2013/11/03/the-souls-acts-done-in-the-divine-will-on-earth-and-the-effect-of-those-acts-in-purgatory/