FEAST OF THE ANNUNCIATION OF THE BLESSED VIRGIN MARY

FEAST OF THE ANNUNCIATION OF THE BLESSED VIRGIN MARY 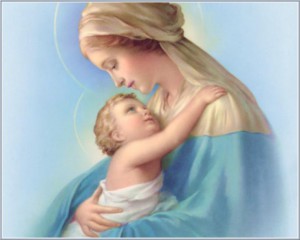 Lesson of the Sovereign Queen:

Your Mama felt ignited with love, and echoing the love of my Creator, I wanted to form one single sea of love, so that the Word might descend upon earth within it. My prayers were incessant, and while I was praying in my little room, an Angel came, sent from Heaven as messenger of the great King. He came before Me, and bowing, he hailed Me: “Hail, O Mary, our Queen; the Divine Fiat has filled You with grace. He has already pronounced His Fiat, for He wants to descend; He is just behind my shoulders, but He wants your Fiat to form the fulfillment of His Fiat.”

Oh, power of the Supreme Fiat! You raised Me so high as to render Me powerful, to the point of being able to create within Me that Humanity which was to enclose the Eternal Word, Whom Heaven and earth could not contain! The Heavens were shaken, and all Creation assumed the attitude of feast. Exulting with joy, they peeked over the little house of Nazareth, to give homages and obsequies to the Creator made man; and in their mute language, they said: “Oh, prodigy of prodigies, which only a God could do! Immensity has become little, power has made itself powerless, His unreachable height has lowered itself deep into the abyss of the womb of a Virgin and, at the same time, He is little and immense, powerful and powerless, strong and weak!”

My dear child, you cannot comprehend what your Mama felt in the act of the Incarnation of the Word. All pressed upon Me and awaited my Fiat, I could say, omnipotent.

Now, dear child, listen to Me: how much you should take to your heart doing the Divine Will and living of It! My power still exists: let Me pronounce my Fiat over your soul. But in order to do this, I want your own. One alone cannot do true good; the greatest works are always done between two. God Himself did not want to do it by Himself, but wanted Me together with Him, to form the great prodigy of the Incarnation. In my Fiat and in His, the life of the Man-God was formed; the destiny of mankind was restored, Heaven was no longer closed, and all goods were enclosed between the two Fiat. Therefore, let us say together, “Fiat! Fiat!”, and my maternal love will enclose in you the life of the Divine Will.

Enough for now; tomorrow I will wait for you again, to narrate to my child the continuation of the Incarnation.

Beautiful Mama, I feel stupefied in hearing your beautiful lessons. O please! I pray You to pronounce your Fiat over me; and I will pronounce my own, so that the Fiat which You so much yearn to reign as life in me, may be conceived within me.

Today, to honor Me, You will come to give the first kiss to Jesus, and will say to Him, as many as nine times, that you want to do His Will; and I will repeat the prodigy of making Jesus be conceived in your soul.

Powerful Queen, pronounce your Fiat, and create the Divine Will in me.

The Catholic Encyclopedia:  The fact of the Annunciation of the Blessed Virgin Mary is related in Luke 1:26-38. The Evangelist tells us that in the sixth month after the conception of St. John the Baptist by Elizabeth, the angel Gabriel was sent from God to the Virgin Mary, at Nazareth, a small town in the mountains of Galilee. Mary was of the house of David, and was espoused (i.e. married) to Joseph, of the same royal family. She had, however, not yet entered the household of her spouse, but was still in her mother’s house, working, perhaps, over her dowry. (Bardenhewer, Maria Verk., 69). And the angel having taken the figure and the form of man, came into the house and said to her: “Hail, full of grace (to whom is given grace, favoured one), the Lord is with thee.” Mary having heard the greeting words did not speak; she was troubled in spirit, since she knew not the angel, nor the cause of his coming, nor the meaning of the salutation. And the angel continued and said: “Fear not, Mary, for thou hast found grace with God. Behold thou shalt conceive in thy womb, and shalt bring forth a son; and thou shalt call his name Jesus. He shall be great, and shall be called the Son of the Most High; and the Lord God shall give unto him the throne of David his father; and he shall reign in the house of Jacob forever. And of his kingdom there shall be no end.” The Virgin understood that there was question of the coming Redeemer. But, why should she be elected from amongst women for the splendid dignity of being the mother of the Messiah, having vowed her virginity to God? (St. Augustine). Therefore, not doubting the word of Godlike Zachary, but filled with fear and astonishment, she said: “How shall this be done, because I know not man?”

The angel to remove Mary’s anxiety and to assure her that her virginity would be spared, answered: “The Holy Ghost shall come upon thee and the power of the Most High shall overshadow thee. And therefore also the Holy which shall be born of thee shall be called the Son of God.” In token of the truth of his word he made known to her the conception of St. John, the miraculous pregnancy of her relative now old and sterile: “And behold, thy cousin Elizabeth; she also has conceived a son in her old age, and this is the sixth month with her that is called barren: because no word shall be impossible with God.” Mary may not yet have fully understood the meaning of the heavenly message and how the maternity might be reconciled with her vow of virginity, but clinging to the first words of the angel and trusting to the Omnipotence of God she said: “Behold the handmaid of the Lord, be it done to me according to thy word.”

The Annunciation is the beginning of Jesus in His human nature. Through His mother He is a member of the human race. If the virginity of Mary before, during, and after the conception of her Divine Son was always considered part of the deposit of faith, this was done only on account of the historical facts and testimonials. The Incarnation of the Son of God did not in itself necessitate this exception from the laws of nature. Only reasons of expediency are given for it, chiefly, the end of the Incarnation. About to found a new generation of the children of God, The Redeemer does not arrive in the way of earthly generations: the power of the Holy Spirit enters the chaste womb of the Virgin, forming the humanity of Christ. Many holy fathers (Sts. Jerome, Cyril, Ephrem, Augustine) say that the consent of Mary was essential to the redemption. It was the will of God, St. Thomas says (Summa III:30), that the redemption of mankind should depend upon the consent of the Virgin Mary. This does not mean that God in His plans was bound by the will of a creature, and that man would not have been redeemed, if Mary had not consented. It only means that the consent of Mary was foreseen from all eternity, and therefore was received as essential into the design of God.

Permanent link to this article: https://bookofheaven.org/2014/03/25/feast-of-the-annunciation-of-the-blessed-virgin-mary/