FEAST OF OUR LADY OF GOOD COUNSEL – APRIL 26 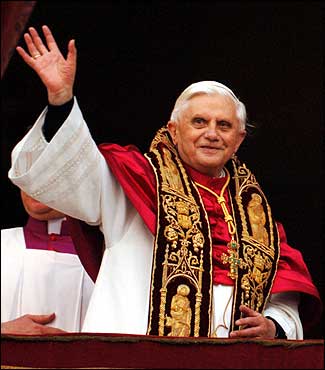 Vatican City, Apr 26, 2014 / 06:09 am (CNA).- The Holy See’s press office has announced that retired pontiff Benedict XVI will be a concelebrant at Sunday’s mass and canonizations of John Paul II and John XXIII.

“Pope Emeritus Benedict XVI has accepted the invitation of Pope Francis to attend the canonization. He will concelebrate the mass, but not at the altar,” announced Vatican spokesman Fr. Federico Lombardi at a press conference on April 26.

The head of the Holy See’s press office went on to explain that due to his advanced age, the retired pontiff will be seated with the other cardinals under a special tent in case of inclement weather, rather than directly at the altar with Pope Francis.

The elderly former Pope resigned the papacy in February 2013 due to his age and deteriorating strength. He resides in a monastic setting behind St. Peter’s Basilica.

Sunday’s mass of canonization will be held in St. Peter’s square. Fr. Lombardi announced today that St. Peter’s basilica will be open after the mass until about 10 p.m.

Pilgrims will have the opportunity to visit the relics of the two saints in the basilica, and will see that the title written on altar where John Paul II is buried has been changed from “Blessed John Paul II” to “Saint John Paul II” in Latin.

During the mass, the reliquary of John XXIII will be carried by four of his nieces and nephews, while those carrying that of John Paul II include Floribeth Mora, a Costa Rican woman who was healed from a brain aneurysm through the intercession of the late Pope.

French Sister Marie Simon-Pierre, whose healing from Parkinson’s was acknowledged as miracle in the cause for John Paul II’s beatification, will read the prayers of intercession during the liturgy.

On Monday morning, Cardinal Angelo Comastri, who is in charge of St. Peter’s Basilica, will celebrate a mass of thanksgiving particularly for the sainthood of John Paul II. The mass is especially for Polish pilgrims, and the choir of Krakow will sing.

Another mass of thanksgiving, for John XXIII, will be held Monday at the church of San Carlo in central Rome. Pilgrims from Bergamo, Italy, the late Pontiff’s home town, will be in attendance.

Permanent link to this article: https://bookofheaven.org/2014/04/26/pope-benedict-xvi-to-concelebrate-canonization-mass/