Feast of Our Lady of Snows 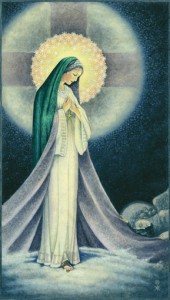 A WEALTHY aristocrat and devout Christian known by tradition as John lived in Rome in the fourth century. He and his wife had no children, and were fearful that their lack of an heir would put an end to the family’s long prominence in the government of the city. They had often prayed for a child but without success. One day John’s wife said, “Let us ask the Blessed Virgin to nominate an heir.” They did so, and their prayer was answered dramatically.

In August 352 a rectangle of snow was discovered on Mount Esquiline, one of the famous Seven Hills. Snowfall of any sort was unheard of in Rome at that time of year, but that it had fallen only in one place and in such a specific pattern was regarded as a phenomenon. People crowded to see the patch of snow, which persisted despite the heat. John was convinced that its shape and size indicated that a church should be built on the spot. In fact both John and the Pontiff had dreamt that Our Lady desired a church to be built on Mount Esquiline. The Holy Father was so moved by his dream that he visited the mysterious snowfall. When he arrived with his retinue, John and his wife were already there kneeling in prayer to the Virgin.

As soon as the plot for the building had been staked out the snow melted. John met the cost of the building, which was completed in 354 and was dedicated the Basilica Liberiana. Seventy years later the church was rebuilt on a grander scale by Pope Sixtus III, who added decorations and ornaments of silver. From then the church was known as Basilica Sixti and the Church of Santa Maria Maggiore [St. Mary Major].

THE PRODIGY OF THE SNOW IS TRUE

The new basilica housed a celebrated painting provided by the Pope. It had belonged to St. Helen, the mother of the Emperor Constantine—–the same Helen who, according to tradition, had made a pilgrimage to Palestine and discovered the original Cross of Christ. The picture, painted on a slab of cedar wood, is of a Madonna and Child. [We were unable to obtain a print of the painting.] The infant Jesus is holding a book and both figures are haloed and crowned—–the crowns presented by Pope Gregory XVI in 1832 as a thank-offering for deliverance from cholera.

The so-called ‘new’ Lady Chapel was built by Pope Paul V in 1613 to house the miraculous painting. He declared, “This image should have a magnificent place of its own, befitting its eminence. For it has always been regarded by all faithful people and through it many miracles and wonders have been wrought.”

Salus Populi Romana [Salvation of the Roman People] is the title of this famous painting and it is rightly named because for centuries the people of Rome have prayed before it in times of famine, war and national crisis.

Many popes have held the basilica on Mount Esquiline in particular regard. When Gregory I was Pope [590-604] Rome was ravaged by a plague. Gregory carried the image of the Holy Mother in procession from the chapel as far as Hadrian’s Mausoleum. When the procession arrived they heard an invisible heavenly choir singing Regina Caeli. When the Pope asked the Virgin to pray for the city he saw an apparition of St. Michael replacing the sword of vengeance in its scabbard. The plague abated.

Pope Benedict XIV had a special affection for the legend. In 1427 he declared, “It must be acknowledged that nothing is wanting to enable us to affirm with moral certainty that the prodigy of the Snow is true: Benedict XVI attended the holy picture every Saturday and prayed the Litany. The night before he died, Paul V asked to be taken to the Chapel of the Blessed Virgin in order to pray before her image. St. Ignatius Loyola, founder of the Society of Jesus, said his first Mass here at Christmas 1538.

The Chapel of the Virgin Salus Populi Romani [Protectress of the Roman People] is very close to the historic heart of the Catholic Church, so it is not surprising that many stories have enriched its tradition over the centuries. It is said that once when Pope Gregory the Great was celebrating Mass in the chapel and intoning the words “Pax Domini sit semper vobiscum,” he heard a choir of Angels sing the response “Et cum spiritu tuo.” From that day the custom in the chapel was to omit that section of the Mass in the belief that it was being offered and sung by the Angels. 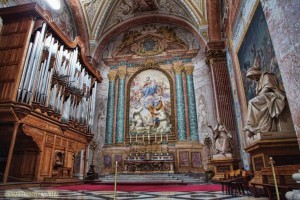 The present-day church is one of the largest basilicas in the world and its Patronal Festival is held on  August 5 in remembrance of the miracle of the snow. During this celebration hundreds of white blossoms are showered from the dome of the chapel. Not to be missed are the thirteenth-century mosaics on biblical themes and the frescoes by Reni and Della Porta. There is an imposing Romanesque belltower erected in 1377.

Santa Maria Maggiore has a further claim to fame. In the seventh century a relic was brought from Bethlehem and traditionally venerated as the manger in which the Christ Child was laid at the first Christmas. And so another name for the great basilica is St. Mary of the Crib.

One of the most spectacular sights which meets today’s pilgrim is the triumphal arch which extends to almost 66 feet. It is decorated in four horizontal sections. In the middle at the top God’s throne is set in a circle, with St. Peter and St. Paul on either side. Above this mosaic are the symbols of the four Gospel writers.

On November 12, 1964 Pope Paul VI made a pilgrimage to the basilica and solemnly proclaimed Our Lady “Mother of the Church.”

On August 5 the anniversary of the miraculous snow fall, the Feast of Our Lady of Snows is celebrated at the basilica of her name. White petals are scattered throughout the place.

Permanent link to this article: https://bookofheaven.org/2015/08/05/feast-of-our-lady-of-snows/