Yom Kippur – September 29 and the Thirteen Mercies of God – Feast of St. Michael the Archangel

Feast of the Archangels — Saints Michael, Gabriel and Raphael – September 29

Feast of the Archangels — Saints Michael, Gabriel and Raphael 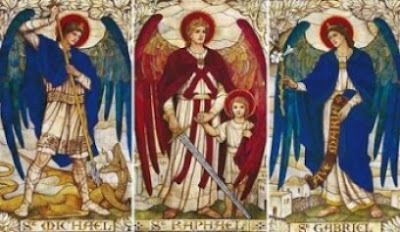 September 29th, the Church celebrates the feast of the archangels. Angels are purely incorporeal, rational beings, extensions of God himself, personifying His grace, majesty and intellect. The Angelic Doctor explains that each individual angel is its own species within the genus “angel”. Archangels have important roles in the history of salvation. There is no doubt that the archangels Michael, Gabriel and Raphael — the only angels named in Sacred Scripture, have been instrumental in advancing God’s divine plan, both in heaven and on earth.

St. Michael, the “Prince of the Heavenly Host”, is second only to the Mother of God in leading the angels. His name in Hebrew means “Who is like God?”. It was Michael who commanded heaven’s forces in casting down Lucifer and the fallen angels into hell. In 1886, after receiving a prophetic vision of the evil to be visited upon the world in the 20th century, Pope Leo XIII instituted a prayer invoking St. Michael’s protection. Scripture mentions him four times (in Daniel 10:13-21 and 12:1, in Jude 1:9 and in Revelation 12:7-9).

The Church recognizes four distinct offices of St. Michael; 1.) to oppose Satan, 2.) to defend the souls of the faithful against the power of Satan, especially at the hour of death. 3.) to champion God’s people, 4.) to accompany souls to their particular judgment, bring them to purgatory, and present them to God following their purgation before entering heaven.

Saint Gabriel’s name means “God’s strength”. He is mentioned in Scripture four times. Gabriel is the archangel most affiliated with the Incarnation and earthly ministry of Christ. Twice in Luke’s Gospel, he foretells the arrival of consequential figures: the birth of John the Baptist to his father Zacharias (Luke 1:11–25) and the birth of the Savior to the Virgin Mary (Luke 1:26–38.).

Tradition holds that Gabriel appeared to Saint Joseph and to the shepherds, and that he “strengthened” Christ during his agony in the garden of Gethsemane.

All that we know of Saint Raphael, whose name means “God has healed”, comes from the Book of Tobit in which he heals Tobias’ blindness. His office, according to popular piety, is that of healing and facilitating acts of mercy. He is affiliated with young people venturing into world, particularly concerning learning and marriage.

The angel in John’s Gospel who descended to the pool of Bethesda and imbued it with healing powers so that the first to enter it after it moved would be healed of whatever infirmity they possessed is identified with Raphael (John 5:1-4).

Almighty and everliving God, who disposes in marvelous order ministries both angelic and human, graciously grant that our life on earth may be defended by those who watch over us as they minister perpetually to you in heaven. Through our Lord Jesus Christ, your Son, who lives and reigns with you in the unity of the Holy Spirit, one God, for ever and ever. Amen.

Permanent link to this article: https://bookofheaven.org/2017/09/28/feast-of-the-archangels-saints-michael-gabriel-and-raphael-september-29/