Month of May: Mary’s Month – The Virgin Mary in the Kingdom of the Divine Will 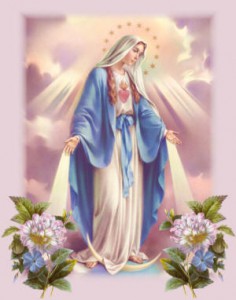 The month of May is traditionally dedicated to Mary in many cultures. May is considered the season of the beginning of new life. Already in Greek culture, May was dedicated to Artemis, the goddess of fecundity. In Roman culture, May was dedicated to Flora, the goddess of bloom, of blossoms. The Romans celebrated ludi florales (literally: floral games) at the end of April, asking the intercession of Flora for all that blooms. This is also related to the medieval practice of expelling winter. May 1 was considered the beginning of growth.

At one time, the custom of having a Mary-month was independent from the month of May as such:

Since medieval times, we have had the combination between Mary and the month of May. Among the earliest witnesses are: Alphonsus X, “el sabio,” King of Castille, Spain (1221-1284) with his “Cantigas de Santa Maria” (“Ben venna Mayo”). Here and elsewhere, both Mary and the month of May are greeted, welcomed and celebrated on specific days in May. Later, the whole month of May became the month of Mary. On each day of this month, special devotions to Mary were organized. This custom originated in Italy (for example: Ferrara, 1784). It was spread widely during the nineteenth century, a century well-known for its monthly devotions (Heart of Jesus in June; Rosary in October).

Permanent link to this article: https://bookofheaven.org/2013/04/30/may-the-virgin-mary-in-the-kindom-of-the-divine-will/