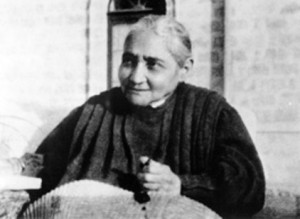 This morning my most sweet Jesus was not coming, and I had to have much patience in waiting for Him; I even reached the point of trying to go out of my usual state, for I felt no more strength to continue it. He was not coming, suffering seemed to have fled from me, I felt my senses within myself – there was nothing left but to add an effort to go out. But while I was doing this, blessed Jesus came, and forming a circle with His arms, He took my head in the middle. At that touch, I no longer felt myself within myself, and I saw Our Lord very indignant with the world. As I wanted to placate Him, He said to me: “Do not want to occupy yourself with Me for now, but I pray you to occupy yourself with my Mama. Console Her, for She is very afflicted because of the heavier chastisements I AM about to pour upon the earth.” Who can say how afflicted I remained?

I was continuing my usual acts in the Divine Volition, and my poor mind paused in Eden, where God created man to give Origin to the Life of the creature.

And my beloved Good, Jesus, making Himself seen all Tenderness and Goodness, told me:  “My daughter, Eden is field of light in which Our Supreme Being created man.  It can be said that he was created in the Light of Our Fiat; his First Act of Life was Light, such that, as an interminable Field of Light would extend behind and before him, to the right and to the left, he was to follow his way in order to form his Life, drawing into his Acts as much Light for as many Acts as he would do, so as to form a Light all his own, as his property by Virtue of his Acts, though drawn from My Divine Will.

“Now, here is the difference of one who operates in It as his Origin and end, in which all of his acts are bound to the Origin of the Light where his Life was formed and had its First Act of Life.  The Light keeps this Life in custody, defends It, and lets nothing extraneous enter into Its light, so as to form one of the portents that only the Light knows how to form.  On the other hand, one who goes down from this Light enters into the dark prison of his will, and in doing his act, he draws darkness; and he draws as much darkness for as many acts as he forms, to form for himself a property all of darkness, all his own.

“Darkness does not know how to keep or defend one who lives in it; and if one does any good act in it, it is always tenebrous, because they are bound by darkness; and since darkness does not have the virtue of being able to defend, things enter that are extraneous to darkness itself; the bothers of weaknesses enter, the enemies of passions, the fierce thieves that hurl the creature into sin and reach the point of hurling her into eternal darkness, where there is no hope of Light.  What difference between one who Lives in the Light of My Divine Will and one who lives as though imprisoned in his human will.” 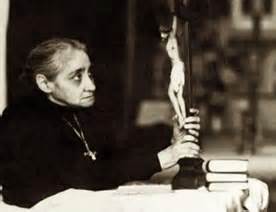 Afterwards, I continued to follow the order of the Divine Will, that It had in Creation, and my little and poor intelligence paused at the point when God created the Immaculate Virgin.  And my lovable Jesus, moving in my interior, told me:  “My daughter (Luisa), all the good and holy acts of the prophets, the patriarchs, and of the ancient people, formed the ground in which the Supreme Being sowed the Seed in order to make germinate the Life of the Celestial Baby Mary, because Her Seed was taken from the human stock.  The Virgin, having within Herself the Operating Life of the Divine Will, expanded this ground with Her Acts, Fecundated it and Divinized it.  She made flow in it, more than beneficial and refreshing Rain, the Sanctity of Her Virtues, the Heat of Her Love; and darting through it with the Light of the Sun of the Divine Will that She possessed as Her own, She prepared the ground to germinate the Celestial Savior; and Our Divinity opened Heaven and made the Just One, the Holy One, the Word, rain down into this Shoot.  And so My Life was formed, human and Divine, to form the Redemption of mankind.

“See, then, in all Our Works, directed for the Good of creatures, We want to find a shelf, a place, a little ground in which to lay Our Work and the Good We want to give to creatures.  Otherwise, where do We put it?  In the air?—without one at least who would know it and would draw Us with her acts, forming her little ground; and We, as the Celestial Sower, sowing the Good We want to give?  If this were not so—that on both sides, Creator and creature, they feel drawn together:  she, preparing herself to receive with her little acts; and God, by giving—it would be as if We did, or wanted to give, nothing to the creature.  So, the acts of the creature prepare the ground for the Divine Sower.  If there is no soil, there is no sowing to hope for; no one goes to sow if he does not have a little ground; much less does God, Celestial Sower, cast the Seed of His Truths, the Fruit of His Works, if He does not find the little ground of the creature.  The Divinity, in order to operate, first wants to place Itself in agreement with the soul; after We have agreed together and We see that she wants to receive that Good, to the point of praying Us and forming for Us the ground in which to lay it—then, with all Love, We give it.  Otherwise, it would be like exposing Our Works to uselessness.”