Jesus Receiving Himself in the Holy Eucharist

The Soul Forms her Paradise on Earth 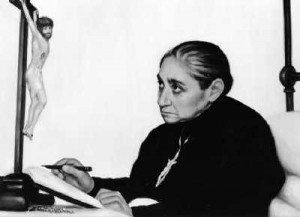 “My daughter (Luisa), We created man with Our Likeness, therefore he too possesses his human unity.  So, if he speaks, if he operates, if he walks and so on, these can be called the effects of his unity, because one is his will, one his head on which all of his acts depend.  Therefore, it can be said that it is the strength of the unity of his will that speaks, that operates, that walks, as the effects of it.  If man did not have this unity, all of his acts would be in contradiction with one another.

“It happens as to the sun:  from the height of its sphere, one is its act of light, and since it possesses the unity of light given to it by its Creator, while it is one single act, its effects of light are innumerable.  Now, for one (Luisa) who does and Lives in My Divine Will, the human volition ceases, its life ends, nor has any reason to exist any longer, because the Life of the Unity of My Divine Will begins.  And since Mine is one single Act, and everything It created, or can do, can be called the Effects of this single Act, the soul (Luisa), Living in this Unity of My Divine Volition as in her own center, is present in all the Effects of the single Act of It, and—oh! how beautiful it is to see this happy creature in all the Effects that Our Will knows how to, and can produce.

“She (Luisa) runs in the light of the sun as the Effect of Our Will; in the heavens, in the sea, in the wind—in everything.  She runs as the human will runs in all the human acts, and as the light of the sun runs in all of its effects; so does the soul (Luisa) run in the Fiat, in all the Effects that It possesses and produces.  This is why the Living in Our Will is the greatest Prodigy, and if Our Divinity wanted to make a greater one, It could not; nor could It find anything greater, more Prodigious, more Powerful, more Beautiful, more Happy than Our Will to give to the creature, because by giving Our Divine Will We give everything.  Its Power Forms Our Echo in the depth of the soul, and Forms Our most beautiful Images; and the echo of the human littleness becomes one with Ours, in such a way that, uniting to Our Prime Act, she (Luisa) runs and diffuses herself in all the Effects that the single Act of God produces.”

Permanent link to this article: https://bookofheaven.org/2013/11/13/luisa-one-who-lives-in-the-divine-will-possesses-the-divine-unity/