Novena for the Feast of Christ the King

How the Soul Can be Food for Jesus 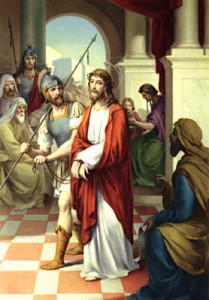 Sin is the chain that binds man, and Jesus wanted to be bound in order to break his (man’s) chains.

This morning my always lovable Jesus made Himself seen all bound – bound were His hands, His feet, His waist; and a double iron chain was coming down from His Neck. He was bound so tightly that His Divine Person was deprived of motion. What a harsh position, such as to make even stones cry! And my Highest Good told me: “My daughter (Luisa), during the course of My Passion all the other pains competed with each other, but they would alternate – one would give the place to another. Almost like sentries, they would mount guard to do the worst to Me, and to boast about having been better than the other. But the ropes were never taken away from Me – from the moment I was taken up to Mount Calvary I (Jesus) remained always bound; rather, they kept adding more and more ropes and chains for fear that I might escape, and to make more fun of Me. But how many pains, confusions, humiliations and falls did these chains procure Me!

However, know that in these chains there was a great mystery and great expiation. As man begins to fall into sin, he remains bound with the chains of his own sin; if it is grave, they are iron chains; if venial, they are chains of rope. So, as he tries to walk in good, he feels the hindrance of the chains, and his step remains hindered. This hindrance he feels wears him out, debilitates him, and leads him to new falls. If he works, he feels hindrance in his hands and remains almost as if he had no hands to do good. In seeing him bound like this, passions make feast and say: ‘The victory is ours’; and from the king he is, they render him slave of brutal passions. How abominable man is in the state of sin! And I (Jesus), in order to break his chains, wanted to be bound and never be without chains, so as to keep my chains ever ready to break his. And when the blows and the shoves would make Me fall, I would stretch My Hands toward him to untie him and make him free again.”

As He was saying this, I saw almost all peoples bound by chains, in such a way as to arouse pity; and I prayed Jesus to touch their chains with His Chains, so that, at the touch of His Chains, those of the creatures would be all shattered.

Permanent link to this article: https://bookofheaven.org/2013/11/15/sin-the-chain-that-binds-man-jesus-bound-to-break-mans-chains/