Two Supports of Jesus in Gethsemani – Knowing the Truths 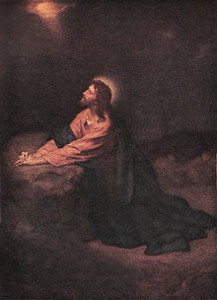 The two Supports of Jesus in Gethsemani. In order to know the Truths, it is necessary to have the will, the desire to know them. The Truth is simple.

I was keeping company with my Jesus who was agonizing in the Garden of Gethsemani, and as much as I could, I compassionated Him, I pressed Him tightly to my heart, trying to wipe His mortal sweats. And my sorrowful Jesus, with faint and expiring voice, told me: “My daughter (Luisa), My Agony in the Garden was hard and painful, maybe more painful than that of the Cross. In fact, if that was the Fulfillment and the Triumph over all, here in the Garden it was the beginning, and sufferings are felt more at the beginning than when they are ended. But in this Agony the most harrowing pain was when all sins came before Me, one by one. My Humanity comprehended all their enormity, and each crime carried the mark, ‘Death to a God’, armed with sword to kill Me! Before the Divinity, sin appeared to Me as so very horrifying and more horrible than death itself. Just in comprehending what sin means, I (Jesus) felt I was dying – and I did really die. I cried out to the Father, but He was inexorable. Not even one was there to help Me, so as not to let Me die. I cried out to all creatures to have pity on Me – but in vain. So, My Humanity languished, and I was about to receive the last blow of death.

But do you know who prevented the execution and sustained My Humanity from dying? The first was my inseparable Mama. In hearing Me ask for help, She flew to My side and sustained Me; and I (Jesus) leaned My right Arm on Her. Almost dying, I looked at Her, and I found in Her the Immensity of My Divine Will intact, without ever a break between My Divine Will and hers. My Divine Will is Life, and since the Will of the Father was immovable and death was coming to Me from creatures, another Creature, who enclosed the Life of My Divine Will, gave Me Life. And here is My Mama who, in the portent of My Divine Will, conceived Me and gave Me Birth in time, now giving Me Life for the second time to let Me accomplish the work of Redemption.

Then I (Jesus) looked to My left, and I found (Luisa) the Little Daughter of My Divine Will. I found you (Luisa) as the First, followed by the other daughters of My Divine Will. Since I wanted My Mama with Me as the First Link of Mercy, through which we were to open the doors to all creatures, I wanted to lean My right Arm on Her. And I (Jesus) wanted you (Luisa) as the First Link of Justice, to prevent It from unloading Itself upon all creatures as they deserve; therefore I (Jesus) wanted to lean My left Arm on you (Luisa), so that you might sustain It together with Me.

With these two Supports I felt Life come back to Me, and as if I had not suffered anything, with firm step, I (Jesus) went to meet My enemies. In all the pains that I suffered during My Passion, many of which were capable of giving Me death, these two Supports never left Me. And when they saw Me nearly dying, with My own Divine Will which they contained, they sustained Me, as though giving Me many sips of Life. Oh, Prodigies of My Divine Will! Who can ever count them and calculate their Value? This is why I (Jesus) Love so much (Luisa) one who Lives in My Divine Will: I recognize My Portrait in her (Luisa), My Noble Features; I feel My own Breath, My Voice; and if I (Jesus) did not Love her (Luisa) I would defraud Myself. I would be like a father without offspring, without the noble cortege of his court, and without the crown of his children. And if I did not have the offspring, the Court and the Crown, how could I call Myself a King? My Kingdom is formed by those who Live in My Divine Will, and from this Kingdom, I (Jesus) choose the Mother (Mary), the Queen, the children, the ministers, the army, the people. I AM everything for them, and they are all for Me.”

Afterwards, I was thinking about what Jesus had told me, and I said to myself: ‘How can this be put into practice?’ And Jesus, returning, added: “My daughter (Luisa), in order to know the Truths, it is necessary to have the will, the desire to know them. Imagine a room in which the shutters are closed: no matter how much sun there may be outside, the room remains always in the dark. Now, opening the shutters means wanting light. But this is not enough, if one does not take advantage of the light to reorder the room, dust it, and put himself to work, so as to not kill the light which is given, and become ungrateful. In the same way, it is not enough to have the will to know the Truths if, at the Light of the Truth which Illuminates, one does not try to dust himself of his own weaknesses, reorder himself according to the Light of the Truth he knows, and put himself to work together with the Light of Truth, making of it his own substance, in such a way that the Light of the Truth which he has absorbed may shine through his mouth, through his hands, through his bearing. It would be as if he killed the Truth; and by not putting it into practice, it would be like remaining in total disorder before the Light. Poor room full of Light, but all messed up, upside down, in total disorder, with a person in it who does not take the care of reordering it – how pitiful would it not be? Such is one who knows the Truths, and does not put them into practice.

However, know that simplicity enters into all Truths as the First Nourishment. If the Truths were not simple, they would not be Light, and they could not penetrate into human minds to enlighten them; and where there is no Light, objects can not be distinguished. Simplicity is not only Light, but it is like the air that one breathes which, though it cannot be seen, gives respiration to all; and if it wasn’t for the air, the earth and everyone would remain without motion. Therefore, if the Virtues, the Truths, do not carry the mark of simplicity, they will be without Light and without air.”

Permanent link to this article: https://bookofheaven.org/2013/11/18/two-supports-of-jesus-in-gethsemani-knowing-the-truths/