One who Operates in the Divine Will gives Jesus the Field to Release New Works, New Love and New Power

The Birth of Jesus – How to make Jesus be Born and Grow in your Hearts.

Pains of Jesus in the Womb of His Mother 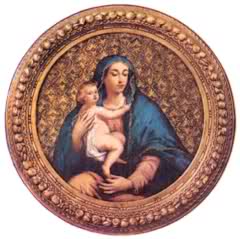 Pains of Jesus in the Womb of His Mother. How all Nature Rejoiced and made Feast at the Birth of Jesus. How, by giving Himself once, He gave Himself forever. The sign that one works for God is firmness.

My days are ever more sorrowful. I am under the cruel press of the hard privation of my sweet Jesus, which is upon me like a deadly sword, to kill me continuously. But as it is in the act of inflicting the last blow in order to end it, it leaves it suspended above my head; and I await this last blow like a relief, in order to go to my Jesus – but I wait in vain! And I feel my poor soul, and also my nature, being consumed and dissolved. Ah, my great sins do not make me deserve to die! What pain! What a long agony! O please, my Jesus, have pity on me! You alone know my harrowing state. Do not abandon me; do not leave me at the mercy of myself!

Now, while I was in this state, I felt I was outside of myself, within a most pure light; and in this light I could see the Queen Mama and the Little Baby Jesus inside Her Virginal Womb. O God! In what a sorrowful state was my adorable Little Baby! His little humanity was immobilized; His little Feet and Hands were immobile, without the slightest movement. There was no space, either to open His Eyes, or to breathe freely. His immobility was such that He seemed to be dead, while He was alive. I was thinking to myself: ‘Who knows how much my Jesus suffers in this state! And how much His beloved Mama suffers, in seeing Baby Jesus so immobilized within Her own Womb!’

Now, while I was thinking of this, my Little Baby, sobbing, said to me: “My daughter, the pains I suffered in this Virginal Womb of My Mama are incalculable to the human mind. But do you know what was the first pain which I suffered in the First Act of My Conception, and which lasted for all of My Life? The pain of death. My Divinity descended from Heaven as fully happy, intangible by any pain and by any death. When I saw My little Humanity being subject to pain and to death for Love of creatures, I felt the pain of death so vividly, that I really would have died of pure pain, if the Power of My Divinity had not sustained Me with a Prodigy, making Me feel the pain of death and the continuation of Life. So, for Me it was always death: I felt the death of sin, the death of Good within the creatures, and also their natural death. What a cruel torment this was for Me, for all of My Life! I, who contained Life and who was the absolute Lord of Life itself, had to subject Myself to the pain of death. Don’t you see My little Humanity immobile and dying in the Womb of My dear Mama? And don’t you yourself feel how hard and excruciating is the pain of feeling like dying, without dying? My daughter (Luisa), it is your Living in My Divine Will that makes you (Luisa) share in the continuous death on My Humanity.”

So, I spent almost the whole morning close to my Jesus, inside the Womb of my Mama, and I saw that, as He was in the Act of dying, He regained Life, to abandon Himself to death again. What pain, to see Baby Jesus in that state!

After this, at night, I was thinking of the Act in which the sweet Little Baby came out of the Maternal Womb, to be born into our midst. My poor mind wandered within a mystery so profound and all Love. And my sweet Jesus, moving in my interior, stretched out His little Hands to embrace me, and said to me: “My daughter (Luisa), the Act of My Birth was the most solemn Act of all creation. Heaven and earth felt plunged into the most profound adoration, at the sight of My little Humanity, which kept My Divinity as though enclosed within walls. So, in the Act of My Birth, there was an Act of silence and of profound adoration and prayer. My Mama prayed, enraptured by the Power of the Prodigy which was coming out from Her. Saint Joseph prayed; the Angels prayed, and the whole of creation felt the Strength of the Love of My Creative Power as being renewed upon itself. All felt honored and received true Honor, for the One who had created them was going to use them for all that was needed by His Humanity. The sun felt honored, in having to give its light and heat to its Creator, recognizing the One who had created it – its true Lord; and it made feast and paid Him honor by giving Him its light. The earth felt honored, when it felt Me lying in a manger; it felt touched by My tender Limbs, and rejoiced with gladness with prodigious signs. All creation, all created beings, saw their true King and Lord within their midst; and feeling honored, each one wanted to perform its office for Me: the water wanted to quench My thirst; the birds, with their trills and warblings, wanted to cheer Me; the wind wanted to caress Me; the air wanted to kiss Me – each one wanted to pay Me its innocent tribute.

Only men, ungrateful, even though all felt something unusual within themselves – a Joy, a strong Power – were reluctant, and suffocating everything, did not move. Although I (Jesus) called them with Tears, with Moans and Sobs, they did not move, except for a few shepherds. Yet, it was for man that I was coming upon earth! I was coming to give Myself to him, to save him, and to bring him back to My Celestial Fatherland. Therefore, I was all eyes to see whether he would come before Me in order to receive the great Gift of My Divine and human Life. So, the Incarnation was nothing but giving Myself at the mercy of the creature. In the Incarnation I gave Myself at the mercy of My dear Mama; when I was born, Saint Joseph too added, to whom I gave the Gift of My Life. And since My Works are Eternal and are not subject to end, this Divinity, this Word who descended upon earth, never withdrew from the earth, in order to have the opportunity to give Himself continuously to all creatures. As long as I lived, I gave Myself in an unveiled manner; and then, a few hours before dying, I made the great Prodigy of leaving Myself in the Sacrament, so that, whoever wanted Me, could receive the great Gift of My Life. I paid no attention either to the offenses they would give to Me, or to the refusals to receive Me. I said to Myself: ‘I have given Myself; I do not want to withdraw, ever again. Let them do to Me whatever they want – I will always belong to them, and be at their disposal’.

Daughter (Luisa), this is the nature of True Love; this is to work as God: firmness, and not to withdraw at the cost of any sacrifice. This firmness in My Works is My Victory – the greatest one of My Glory; and this is the sign to know whether the creature works for God: firmness. The soul looks to no one in the face – neither to pains, nor to herself, nor to self-esteem, nor to creatures. Even though it may cost her own life, she looks only at God, for Love of Whom she set herself to work; and she feels victorious in offering the sacrifice of her life for Love of Him.

Not being firm is of the human nature and of the human way of working. Not being firm is the work of passions, and with passion. Mutability is weakness, it is cowardice, and it is not of the nature of True Love. Therefore, firmness must be the guide in working for Me. So, in My Works I never change: whatever the events may be, when a work is done once, it is done forever.”

Permanent link to this article: https://bookofheaven.org/2013/12/23/pains-of-jesus-in-the-womb-of-his-mother/