If in the soul there is no Purity, Upright Working and Love, she cannot be the Mirror of Jesus.

The Circle of Truth of the Knowledge of self

The Interior Passion which the Divinity made the Humanity of Jesus suffer during the course of His whole Life. 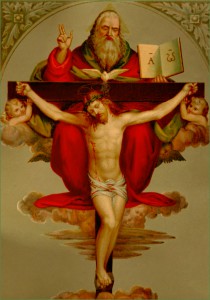 The Interior Passion which the Divinity made the Humanity of Jesus suffer during the course of His whole Life.

Continuing in my usual state, for about three days I felt I was dissolved in God. Many times good Jesus drew Me inside His Most Holy Humanity, and I swam in the Immense Sea of the Divinity. Oh, how many things one could see! How clearly one could see all that the Divinity operated in His Humanity! Very often my Jesus interrupted my surprises, telling me: “Do you see, My daughter (Luisa), with what Excess of Love I Loved the creature? My Divinity was too jealous to entrust to the creature the task of Redemption, and so It made Me suffer the Passion. The creature had no power to make Me die as many times for as many creatures which had come, and were to come to the light of Creation, and for as many mortal sins as they would have the disgrace to commit. The Divinity wanted Life for each life of creature, and Life for each death which she gave herself through mortal sin. Who could be so powerful over Me as to give Me so many deaths, if not My Own Divinity? Who would have had the Strength, the Love, the Constancy to watch Me dying so many times, if not My Own Divinity? The creature would have grown tired, and would have given up.

And do not think that this Crafting of My Divinity started late, but as soon as My Conception was accomplished, even in the Womb of My Mama, who many times was aware of My Pains, and was Martyred, feeling death along with Me. Therefore, even from the Maternal Womb, My Divinity took on the Commitment of Loving Executioner – but, because Loving, more demanding and inflexible; so much so, that not a thorn was spared to My groaning Humanity – not a nail… But not like the thorns, the nails, the scourges I suffered in the Passion which creatures gave Me, and which did not multiply – as many as they inflicted, so many remained. Rather, those of My Divinity Multiplied at each offense – as many thorns for as many evil thoughts; as many nails for as many unworthy works; as many blows for as many pleasures; as many pains for as many different offenses. They were Seas of Pains, Thorns, Nails, and Innumerable Blows. In the Face of the Passion which My Divinity gave Me, the Passion which the creatures gave Me on the last of My days was nothing but the shadow – the image of what My Divinity made Me suffer during the course of My Life. This is why I Love souls so much: they are Lives that they cost Me – they are Pains inconceivable to created mind. Therefore, enter into My Divinity, and see and touch with your own hand all that I suffered.”

I don’t know how – I found myself inside the Divine Immensity, which was raising Thrones of Justice for each creature, to which sweet Jesus had to respond for each one of their acts – suffering their pains and death, paying the penalty for everything. And Jesus, like a sweet little lamb, was killed by Divine Hands, to rise again and to suffer more deaths… Oh God! Oh God, what harrowing Pains! Dying to rise again – and rising again to suffer a yet more excruciating death!

I felt I was dying in seeing my sweet Jesus being killed. Many times I would have wanted to spare just one death for the One who Loves me so much. Oh, how well I understood that only the Divinity could make my sweet Jesus suffer so much, and could claim the Merit of having Loved men to Folly and Excess, with unheard-of Pains and with Infinite Love. Neither Angel nor man had this Power in hand: being able to Love us with such Heroism of Sacrifice – like a God. But who can tell everything? My poor mind was swimming in that Immense Sea of Light, of Love and of Pains; and I remained as though drowned, unable to come out. If my lovable Jesus had not drawn me into the little Sea of His Most Holy Humanity, in which the mind is not so submerged – unable to see any boundary, I could have said nothing.

Then, after this, my sweet Jesus added: “Beloved daughter (Luisa), Newborn of My Life, come into My Divine Will – come and see how much there is to substitute for, for My many Acts, still suspended, not yet substituted for by creatures. My Divine Will must be within you (Luisa) as the Primary Gear of a clock: if it moves, all the other gears move, and the clock signals the hours and the minutes. So, all the accord is in the motion of this primary wheel; and if this first wheel has no motion, the clock is stopped. In the same way, the First Wheel within you (Luisa) must be My Divine Will, which must give Motion to your thoughts, to your heart, to your desires – to everything. And since My Divine Will is the Central Wheel of My Being, of Creation and of all things, your motion, coming out from that Center, will come to substitute for as many acts of creatures. Multiplying in the motions of all as Central Motion, it will come to place before My Throne, on their behalf, the acts of the creatures, and will substitute for everything. Therefore, be attentive – (Luisa) your Mission is Great and Fully Divine.”

Permanent link to this article: https://bookofheaven.org/2014/02/03/the-interior-passion-which-the-divinity-made-the-humanity-of-jesus-suffer-during-the-course-of-his-whole-life/