What one must do in order to Fulfill the Office of Living in the Divine Will. Where little ones must be and what they must do in It.

(Luisa) One who Lives in the Divine Will lends to It her nothingness emptied, that the Fiat uses as the space in which to exercise Its Creation.

The Tortured Body of Jesus is the True Portrait of the man who commits sin.

The Tortured Body of Jesus is the True Portrait of the man who commits sin. In the Scourging, Jesus let His Flesh be torn to shreds, and He reduced all of Himself to a Wound in order to give Life back to man once again. 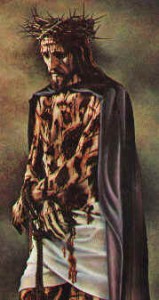 Finding myself in my usual state, I was following the Hours of the Passion; and while I was accompanying my sweet Jesus in the Mystery of His painful Scourging, He made Himself seen all skinned. His Body was stripped, not only of His Garments, but also of His Flesh; His Bones could be counted one by one. His sight was not only harrowing, but horrible to look at, such as to strike fear, fright, reverence, and love at the same time. I felt mute before such a harrowing scene. I would have wanted to do who knows what to relieve my Jesus, but I could do nothing – the sight of His Pains gave me death; and Jesus, all Goodness, told me: “My beloved daughter (Luisa), look well at Me, that you may know My Pains in depth. My Body is the True Portrait of the man who commits sin. Sin strips him of the Garments of My Grace; and I let Myself be stripped of My Garments so as to give them back to him once again. Sin deforms him, and while he is the most beautiful creature that came out of My Hands, he becomes the ugliest one – disgusting and repugnant. I was the Most Beautiful of men, and I can say that, in order to give Beauty back to man, My Humanity took on the ugliest form. Look at Me – how horrid I AM..! I let My Skin be ripped off by dint of lashes, to the point that I could no longer recognize Myself. Not only does sin take Beauty away, but it forms deep wounds, rotten and gangrenous, which corrode the most intimate parts of him; they consume his vital humors, so everything he does are dead – skeletal works. They snatch from him the Nobility of his Origin, the Light of his Reason – and he becomes blind. And I, in order to fill the depth of his wounds, let My Flesh be torn to shreds; I reduced all of Myself to a Wound, and by shedding My Blood in rivers, I made the vital humors flow in his soul, so as to give Life back to Him once again.

Ah! Had I not had the Fount of the Life of My Divinity within Me, which, since My Humanity died at each pain that they gave Me, substituted My Life – I would have died from the very beginning of My Passion.

Now, My Pains, My Blood, My Flesh which fell off in shreds, are always in the Act of giving Life to man; but man rejects My Blood so as not to receive Life; he tramples upon My Flesh so as to remain wounded. Oh, how I feel the weight of ingratitude!” And throwing Himself into my arms, Jesus burst into tears. I clasped Him to my heart, but He was Crying strongly. What torment, to see Jesus Crying! I would have wanted to suffer any pain so that He would not Cry. So I compassionated Him, I kissed His Wounds, I dried His Tears; and He, as though cheered, added: “Do you know how I Act? I Act like a father who loves his son very much. This son is blind, deformed, crippled; and his father who loves him to folly – what does he do? He plucks his own eyes out; he cuts his own legs, tears his own skin off, and gives everything to his son, saying: ‘I am happier to remain blind, crippled, deformed myself, as long as I see that you, my son, can see, can walk, and are beautiful…’ Oh, how happy is that father, in seeing his son looking with his eyes, walking with his legs, and covered with his beauty! But what would the sorrow of the father be, if he saw his son, ungrateful, throwing away his eyes, legs and skin, contenting himself with remaining ugly as he is? So I AM: I took care of everything, but men, ungrateful, form My Most Bitter Sorrow.”

Permanent link to this article: https://bookofheaven.org/2014/02/08/the-tortured-body-of-jesus-is-the-true-portrait-of-the-man-who-commits-sin/