(Luisa) One who Lives in the Divine Will lends to It her nothingness emptied, that the Fiat uses as the space in which to exercise Its Creation.

Feast of Our Lady of Lourdes

How man was Created to Live in Intimacy with God and in His House, and as he withdrew from His Will, by God’s Goodness he was given the legal share. 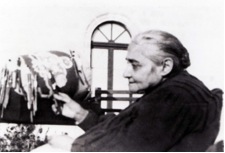 How man was Created to Live in Intimacy with God and in His House, and as he withdrew from His Will, by God’s Goodness he was given the legal share.

My poor mind undergoes the sweet enchantment of the refulgent Sun of the Eternal Fiat, and—oh! how many Beautiful Touching Scenes It unfolds within me, such that, if I were able to tell them as I see them, all would undergo the Sweet Enchantment and, in chorus, all would say:  “We want to do the Divine Will.”

But, alas! I am always the little ignorant one, and only stammering can I say something.  But in comprehending the Great Good of this Divine Volition, and how we swim in Its Gigantic Waves of Light, of unspeakable Beauty, of unreachable Sanctity, I was thinking to myself:  “How is it possible for such a Great Good not to be Known?  And while we swim inside of it, we ignore the Great Good that surrounds us, that Invests us inside and out, that gives us Life; and only because we ignore it, we do not enjoy the Admirable Effects of all the Great Goods that a Will so holy contains?  O please! reveal Yourself, Oh Omnipotent Fiat, and the face of the earth will change.  And besides, why did Our Blessed Lord not please to manifest, from the Beginning of Creation, the many Admirable things that this Most Holy Will wants to do and give to creatures?”

And while my mind was wandering, as though enraptured in the Sweet Enchantment of the Divine Volition, My Love, My Life, Jesus, the Celestial Teacher, who Charms with His Lovely Speaking on His Own Will, making Himself seen, told me:  “My little daughter (Luisa) of My Divine Will, the creature cannot live, either soul or body, without My Divine Will; and since It is her First Act of Life, she finds herself in the condition either of receiving Its Act of Continuous Life from It, or of not being able to have existence.  And since man was Created for him to Live in the Opulence of the Goods of this Divine Will, his Beloved Inheritance, he was therefore Created for him to Live of Us and in Our House, like a son who lives with his father.  Otherwise, how could he be Our Amusement, Our Joy and Happiness, if he were not to Live close to Us, together with Us in Our Divine Will?  A son who is far away cannot form the joy of his father, his smile, his amusement, his intimate conversation.  From afar, they cannot play together or smile with happiness; on the contrary, the mere distance breaks the love and brings the bitterness of not being able to enjoy the beloved.

“See, then, man was Created to Live in Intimacy with Us, in Our House, in Our Own Will, for Us to secure Our Joys and Perennial Happiness as well as his.  But man, Our son, though he was Happy in the House of his Father, rebelled and went out of his Paternal House, and by doing his will he lost the Smile of his Father, His Pure Joys; and since he could not Live without the Concourse of Our Divine Will, We Acted as Father and gave him the legal share of Our Divine Will—no longer as Life, that carried him on Its Lap to render him Happy and Holy, but as concurring, to preserve him alive—not to make him Happy as before, but to give him the things of strict necessity and according to how he would behave.

“Without My Divine Will there cannot be Life.  And this is why so little is Known about My Divine Fiat, because it is Its mere legal share that creatures know, and many times this legal share is not even recognized completely, because one who lives of the legal share does not Live in the House of his Father; he is far away from Him, and many times he finds himself in the condition of spoiling with unworthy acts the very legal share he received.  Therefore, do not be surprised if little is Known about My Divine Will, if one does not Live in It, if one is not in continuous contact to receive Its Life that makes one Happy, that Sanctifies and, one being close to It, opens Its Secrets and makes Itself Known—who It is, what It can give to the creature, and how It Yearns to keep her on Its Lap to form in her Its Divine Life.  More so since, by doing his will, man placed himself in the condition of a servant, not of an heir, and a servant has no right to the inheritance of his master, but to the miserable compensation for him to live life with hardship.

“Therefore, My daughter (Luisa), it can be said that with you (Luisa) I (Jesus) have opened the Doors, to let you enter to Live in Our House, in Our Divine Will.  And keeping you with Us, We have Manifested to you so much about Our Divine Volition—not as the legal share, but as Our Fortunate Heiress.”

After this, He added:  “My daughter (Luisa), more so, since in that little that was written of My Divine Will in the whole history of the world, having known only the legal share, they have written of It what they have known of My Fiat after sin, what relationships It has with creatures, even though they offend It and do not Live in Our House.  But as for the relations that passed between My Fiat and Adam Innocent, before sinning, they have written nothing.  And how could they write if no one has Lived in My Divine Will as in one’s own house?  How could they know Its Secrets and the Great Prodigy that the Operating Life of a Divine Will can do in the creature?

“Therefore, they could and can say of My Divine Fiat that It disposes everything, that It Commands, that It Concurs; but as for saying of My Divine Will how It Operates within Itself, in Its House, the Power of Its Immensity that in one instant does everything, envelops everything, in the creature as It does within Itself—this is Science that the creature has ignored until now; it could not be written if not by Manifestation of My Divine Fiat, and to one (Luisa) whom It called to Live in Our House as Our daughter, close to Us, inside My Divine Will—not far away—such that, being able to Amuse Ourselves with her (Luisa), We would make her aware of Our Most Intimate Secrets.  And if We had wanted to Manifest what Regards Our Will in relationship with the creature, and she were not Living in It, she would not have understood Us; it would have been for her like a foreign and unintelligible dialect.”

Permanent link to this article: https://bookofheaven.org/2014/02/10/how-man-was-created-to-live-in-intimacy-with-god-and-in-his-house-and-as-he-withdrew-from-his-will-by-gods-goodness-he-was-given-the-legal-share/