How Jesus can Live in the soul, and the soul in Jesus and from His Life.

The Divine Will is like opium for the soul. The creature does nothing other than want Jesus to do everything in her. 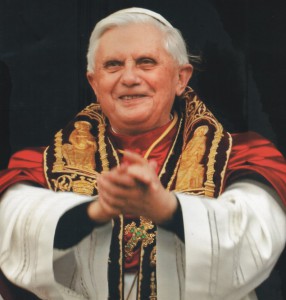 L’Aquila, Italy, July 4, 2010 / 11:30 am (CNA/EWTN News).– Before leading the Angelus prayer from the Italian city of Sulmona he visited on Sunday, the Holy Father proposed Mary as “the Perfect Model of Obedience to the Divine Will.” He hoped also for increased appreciation of the simple life, as St. Celestine lived it, and the subsequent freedom of heart and mind that opens us up to sharing.

During the visit for the occasion of the 800th anniversary of the birth of St. Celestine, the Holy Father led thousands of faithful in the recitation of the Marian prayer after Mass in the town square.

He prayed that the people of God would be able to “walk joyously and united on the path of faith, hope and love” and that, “faithful to the inheritance of St. Celestine, we may always know how to put evangelical radicality and Mercy together, so that all who seek God may find him.”

St. Celestine was a13th century hermit that became Pope Celestine V. His remains are now housed in the crypt of Sulmona’s Cathedral of San Panfilo, where Benedict XVI will pay a visit Sunday afternoon to host an encounter with area youth.

Turning to Mary, “Virgin of silence and of listening,” Benedict XVI said that, in her, St. Celestine “found the Perfect Model of Obedience to the Divine Will,” as he lived  a simple and humble life, seeking the “truly essential” and thanking the Lord always as he recognized “in everything the Gift of His Goodness.”

Turning to the present, the Pope said “also we, who live in an age of greater comforts and possibilities, are called to appreciate a sober lifestyle, to keep our hearts and minds freer and to be able to share our possessions with our brothers.”

He prayed that “Holy Mary, who encouraged the First Community of disciples of Jesus with her Maternal Presence, help also the Church of today to give good witness to the Gospel.”

‘But, what is this obedience? What is it made of? What is the Nourishment that sustains it?’ And Jesus makes His harmonious Voice heard to my hearing, which says: “Do you want to know what Obedience is? Obedience is the quintessence of Love; Obedience is the Finest, the Purest, the Most Perfect Love, extracted from the Most Painful Sacrifice – to destroy oneself in order to Live again of God. Being Most Noble and Divine, Obedience tolerates nothing human in the soul, and nothing which does not belong to it. Therefore, all Its attention is on destroying within the soul everything which does not belong to Its Divine Nobility – that is, love of self. And once It has done this, It cares very little about whether it alone struggles and toils on behalf of the soul, while allowing the soul to rest Peacefully. Finally, I Myself am Obedience.”

Continuing in my usual state, blessed Jesus came for just a little and told me: “My daughter, Obedience is the Ark of My Dwelling in the soul. Where this Ark of Obedience is not present, I can say that there is no place for Me in that soul, and I AM forced to remain outside.”

The Virgin Mary in the Kingdom of the Divine Will

The soul to the Celestial Queen, Model for Souls:

Celestial Mama, I, your poor child, feel the irresistible need to be with You, to follow your steps, to look at Your actions in order to copy them, to make of them my model and keep them as guide of my life. I feel so much the need of being guided, because by myself I can do nothing; but with my Mama who Loves me so much, I will be able to do everything – and also the Divine Will.

Now, my child, listen to Me: I enclosed myself in the temple; the Lord wanted it so, that I might lay the Kingdom of the Divine Will in the acts which I was to do in it, so as to let Me prepare the ground with my human acts, as well as the heaven of the Divine Will which was to be formed over this ground, for all souls consecrated to the Lord. I was most attentive to all the duties which were normally done in that holy place. I was peaceful with everyone, nor did I ever cause any bitterness or bother to anyone. I submitted myself to the most humble tasks; I found difficulty in nothing, either in sweeping or in doing the dishes. Any sacrifice was an honor – a triumph for Me. But do you want to know why? I looked at nothing – everything was Will of God for Me. So, the little bell that called Me was the Fiat; I would hear the mysterious sound of the Divine Will which called Me in the sound of the little bell, and my Heart would rejoice and run to go wherever the Fiat was calling Me. My rule was the Divine Will, and I saw My superiors as the ones who imparted the Commands of a Will so Holy. So, for Me, the little bell, the rule, the superiors, and my actions, even the most humble ones, were joys and feasts which the Divine Fiat prepared for Me; and extending Itself also outside of Me, It called Me to extend Its Will in order to form Its Kingdom in the smallest of my acts.

I continued my life in the temple and my little escapes up there to my Celestial Fatherland. I had my rights as daughter to make my little visits to my Divine Family which, more than Father, belonged to Me. But what was not my surprise when in one of these visits the Divine Persons made Known to Me that it was Their Will for Me to leave the temple; first, to unite myself in bond of marriage, according to the manner of those times, to a holy man called Joseph; and then, to withdraw together with him to live in the house of Nazareth.

So, in spite of my surprise, immediately I said: “Fiat”, knowing that the Divine Will would not harm me, or prejudice my sanctity. Oh, had I wanted to put in one act of my human will, even in the aspect of not wanting to know man, I would have sent to ruin the plans of the coming of the Word upon earth! Therefore, it is not the diversity of states that prejudices sanctity, but the lack of Divine Will, and of the fulfillment of one’s own duties to which God calls the creature. All states are holy, marriage too, provided that the Divine Will is present, as well as the exact sacrifice of one’s own duties. But the great part are indolent and lazy, and not only do they not become saints, but of their own state, some make a purgatory, and some a hell.

…So, as I learned I was to leave the temple, I did not say a word to anyone, waiting for God Himself to move the external circumstances to make Me fulfill His adorable Will, as in fact happened. The superiors of the temple called Me and let Me know that it was their will, and also the custom of those times, that I prepare myself for marriage. I accepted. Miraculously, among many, the choice fell upon Saint Joseph; so the marriage was made and I left the temple.

Now, dear child, listen to Me: how much you should take to your heart doing the Divine Will and Living of It! My Power still exists: let Me pronounce My Fiat over your soul. But in order to do this, I want your own. One alone cannot do True Good; the Greatest Works are always done between two. God Himself did not want to do it by Himself, but wanted Me together with Him, to form the Great Prodigy of the Incarnation. In My Fiat and in His, the Life of the Man-God was formed; the destiny of mankind was restored, Heaven was no longer closed, and all goods were enclosed between the two Fiat. Therefore, let us say together, “Fiat! Fiat!”, and My Maternal Love will enclose in you the Life of the Divine Will.

My child, you must know that the Divine Will possesses, by nature, the Source of Joys, and when It Reigns in the creature It delights in giving, in each one of her acts, the New and Continuous Act of Its Joys and Happinesses. Oh, how Happy we were! Everything was Peace, Highest Union, and each of us felt honored in Obeying the other. My dear Son also competed in wanting to be Commanded by Me and by dear Saint Joseph in the little jobs.

My Heart of Mother bled with sorrow in having to submit My Dear Son, My Life, My own Creator, to such a bitter pain. Oh, how I would have wanted to take His place! But the Supreme Volition imposed Itself on My Love, and giving Me Heroism, Commanded Me to circumcise the Baby God. My child, you cannot comprehend how much it cost Me; but the Divine Fiat won, and I Obeyed, united with Saint Joseph.

Now, at the end of the forty days, the dear Baby, drowned more than ever in His love, wanted to Obey the law, presenting Himself to the temple to offer Himself for the salvation of each one. It was the Divine Will that called us to the great sacrifice, and we Promptly Obeyed. My child, when this Divine Fiat finds Promptness in doing what It wants, It places at the creature’s disposal Its Divine Strength, Its Sanctity, Its Creative Power to multiply that act, that sacrifice, for all and for each one. In that sacrifice It places the little coin of infinite value, with which one can pay and satisfy for all.

Permanent link to this article: https://bookofheaven.org/2014/02/18/pope-benedict-calls-mary-a-perfect-model-of-obedience-to-divine-will/