PRAYERS OF THE BISHOPS OF UKRAINE

The Anniversary of Luisa Piccarreta’s Passage into Heaven

click here for more on Luisa’s Passage into Heaven

Luisa in the serenity of sister death

click image for a Collection of Memories of the Servant of God, Luisa Piccarreta

The Holy Death of Luisa Piccarreta

At the news of Luisa’s death which occurred on March 4,1947, it seemed that the people of Corato paused to live a unique and extraordinary event. Their Luisa, their Saint, was no more. And like a river in full spate they poured into Luisa’s house to look at her and express their affection to her, for so many years esteemed and beloved by all. On the day of her funeral official mourning was declared in the town. Luisa’s body remained exposed for public veneration (with the permission of the health service’s doctor) to satisfy the thousands of people of Corato and the surrounding area who poured into the house day and night. It was necessary to have recourse to the police to control the flow of people. Everyone was under the impression that Luisa had fallen asleep and was not dead. In fact, her body, laid on the bed, did not undergo rigor mortis. It was possible to raise her hands, move her head in all directions, bend her fingers without forcing them, and raise and bend her arms. Her eyelids could be lifted and one could see her shining eyes, undimmed by death: everyone – strangers, priests, ecclesiastical and civil figures – wanted to see this unique and marvelous case. A great many skeptics left the mortuary chamber shocked, crying and renewed. Luisa seemed alive, as if a placid and serene sleep had stopped her for an instant. Everyone was convinced that she wasn’t dead, and some said: “Call the bishop and you will see that by making the sign of the cross he will awaken her; isn’t Luisa a daughter of obedience?“. This hope expressed the love they all felt for the Servant of God. But a council of doctors, summoned by the religious, civil and health authorities, declared after a careful examination that beloved Luisa really was dead. As long as she remained exposed for public veneration, she gave no sign of corruption nor did her body emanate any odors of putrefaction. Like a queen, she remained sitting on her bed. It proved impossible to lay her out, so that a special “p” shaped coffin had to be built for her, the front and sides of glass so that everyone could see her for the last time. Luisa the Saint, who for about 70 years had always remained sitting up in bed without ever leaving her room, passed among the immense lines of people, borne on the shoulders of a numerous group of sisters of all orders and surrounded by an unspecified number of priests and religious. Her funeral was celebrated by the entire chapter in the main church, with the participation of all the confraternities of Corato…I visited Luisa’s body several times during the four days that she remained exposed, touching her several times and taking some of the flowers that were constantly placed upon her feet and legs, which I have guarded jealously for many years among my books. Many were given to the sick who were healed when they touched them and were able to attend her funeral. As the coffin passed, the bed-ridden were carried to the doors of their houses and many, it was said, received special graces. Luisa was buried in the Calvi family chapel. On July 3, 1963, her mortal remains were returned to Corato, to rest permanently in the parish Church of Santa Maria Greca. 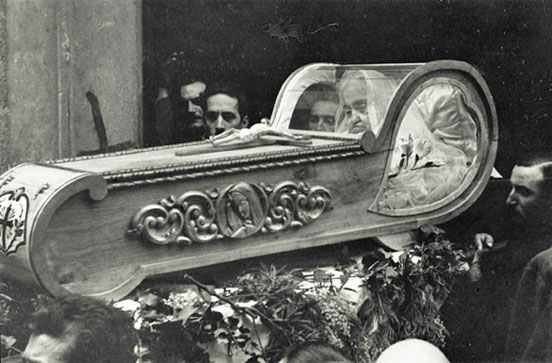 The special coffin, designed with front and side windows 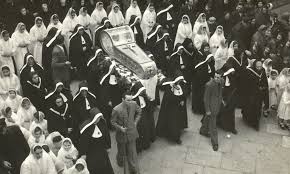 All the townspeople of Corato bid their last farewell to Luisa “the Saint”. The Sisters of the Divine Zeal surround the coffin

“Now I die with greater contentment, because the Divine Will has consoled me more than usual with Its presence in these last few moments of my life.

“Now I see a long, beautiful and spacious road, all illuminated by an infinite number of resplendent suns – Oh, yes, I recognize them! They are all my acts done in the Divine Will!

Permanent link to this article: https://bookofheaven.org/2014/03/03/anniversary-of-luisa-piccarretas-passage-into-heaven/