Ash Wednesday Begins the Hours of the Passion

Definitions of the Cross. Jesus asks her to give Him relief. She sees a man committing suicide. 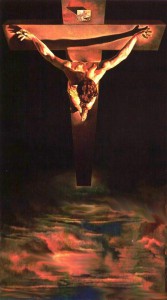 Definitions of the Cross.

As I was in suffering a little more than usual, Blessed Jesus came for a little and told me:  “My daughter (Luisa), the Cross is Support of the weak, it is Strength of the strong, it is Seed and Custody of virginity.”  Having said this, He disappeared.

Jesus asks her to give Him relief. She sees a man committing suicide.

Continuing in my usual state, I found myself outside of myself with baby Jesus, all afflicted. In seeing Him so afflicted, I said: ‘My dear little one, tell me, what do You want? That I suffer in order to relieve You?’ And He placed himself with His Face to the ground, praying, almost wanting me to interpret His Will, but I could not understand anything. I raised Him from the ground, I kissed Him several times, and I said: ‘My Beloved, I cannot understand what You want. Do You want me to suffer the Crucifixion?’ And He: “No”. He took my arm with His Hand, and my wrist appeared from the cuff of my shirt. In seeing this, I said: ‘Do you want me to be stripped? I feel great repugnance, but for love of You, I submit myself.’

In the meantime, I saw a man who, taken by desperation and by esteem of his own self, was committing suicide – and this, in our town. The baby told me: “I cannot contain so much bitterness – receive part of it.” And He poured a little bit of His bitterness into my mouth. I ran to that man to help him to repent of the evil he had done. The demons were taking that soul, placing it on the fire, and turning it over and over again as if they were roasting it. I freed him as many as two times, and then I found myself inside myself, praying the Lord to have Mercy on that unfortunate soul. Blessed Jesus came back with the Crown of Thorns, so sunken into His Head, that the thorns appeared even inside His Mouth; and He told me: “Ah, My daughter (Luisa), yet many do not believe that the Thorns penetrated even into My Mouth. The sin of pride is so awful as to be the poison of the soul – it kills it. Just as one who has something across his mouth prevents any food from passing into his body to give him life, so does pride prevent the Life of God in the soul. This is why I wanted to suffer so much because of human pride; and in spite of this, the creature reaches such pride that, drunk with pride, he loses the Knowledge of himself, and reaches the point of killing his body and soul.”

To obey, I say that when I told father what I have written above, he assured me that on that morning a man had committed suicide.

Permanent link to this article: https://bookofheaven.org/2014/03/04/definitions-of-the-cross-jesus-asks-her-to-give-him-relief-him-she-sees-a-man-committing-suicide/