Our participation in the subjective redemption

by Fr William G Most 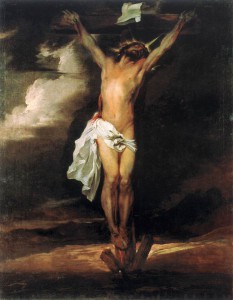 Rom 5:8 said, “God proved His love.” Now, if someone desires the well-being of another, and starts out to procure it, but then runs into an obstacle, and if a small obstacle will stop him, the love is small If it takes a great obstacle, the love is great. But if that love could overcome even the immense obstacle of the terrible death of Jesus, that love is immense, beyond measure.

It was not only the physical pain, but the rejection by those whom He loved that hurt Him. The pain of rejection can be measured by two things: 1) how severe is the form of the rejection; 2) how great is the love for the one who is rejecting.

If someone jostles me in a crowd, that is a small thing. But if he wants to kill me, that is far worse, and if he means to do it in the most hideous way possible–then the rejection is at the peak. .And what is the love of Jesus? Inasmuch as He is a Divine Person, the love is infinite; inasmuch as we consider the love of His human will, able to overcome such a measureless obstacle, the love is beyond measure.

In the Garden of Gethsemani Jesus foresaw all sins of all times, and suffered from that vision. Let us recall His foreknowledge and life-long anxiety, resulting from the vision. His soul saw from the first instant of conception, and which He let us see briefly in Lk.12:50 and Jn 12:27. In line with this, Pius XI, wrote in his Encyclical Miserentissimus Redemptor (AAS 20.174): “Now if the soul of Christ [in Gethsemani] was made sorrowful even to death on account of our sins, which were yet to come, but which were foreseen, there is no doubt that He received some consolation from our reparation, likewise foreseen.”

So now we see why obedience called for something so tremendous. Yes, even the least thing done by an Infinite Person could rebalance. In fact, the Father could have accepted an incomplete rebalance, from any religious act He might order to be done by an ordinary human. Or, He could have been content with the Incarnation in a palace since, again, any act of an Infinite Person is infinite in value. But the Father wanted not only to be able to forgive, but to forgive lavishly (The priest in giving absolution, can wipe out even a lifetime of dreadful sins in a moment: “I absolve you.”) So He went beyond the incarnation in a palace, to the stable, beyond an Incarnation with only a prayer, to the horrible death of the cross. The first thing Jesus had to say to His Apostles when He first came after His resurrection was, “Whose sins you shall forgive, they are forgiven them.” He had just paid a terrible price for that forgiveness He could hardly wait, we might say, to make that concretely possible.

Permanent link to this article: https://bookofheaven.org/2014/03/14/the-redemption-shows-gods-love-for-man/