Feast of the Archangels

Also known as Our Lady of Mercy 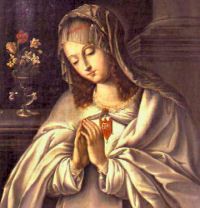 Today, in many parts of the world, the Catholic Church commemorates the feast of Our Lady of Ransom, also known as Our Lady of Mercy or Nuestra Señora de la Merced.

The Blessed Virgin appeared in 1218 in separate visions to St. Peter Nolasco, St. Raymund of Penafort, and James, king of Aragon, asking them to found a religious order dedicated to freeing Christian captives from the barbarous Saracens or Moors, who at that time held a great part of Spain. On August 10, 1218, King James established the royal, military and religious Order of our Lady of Ransom (first known as the Order of St. Eulalia, now known as the Mercedarian Order), with the members granted the privilege of wearing his own arms on their breast. Most of the members were knights, and while the clerics recited the divine office in the commanderies, they guarded the coasts and delivered prisoners. This pious work spread everywhere and produced heroes of charity who collected alms for the ransom of Christians, and often gave themselves up in exchange for Christian prisoners.

V18 – 10.10.25 – As I was in my usual state, my poor mind found itself within an extremely high atmosphere.  I seemed to see the Divinity, and upon one knee of the Celestial Father, the Queen Mama, dead, as if She had no life.  Surprised, I thought to myself:  ‘My Mama is dead; but what a happy death – to die on the knees of our Creator!’  But, looking more closely, I saw Her will as though detached from Her body, held in the hands of the Divine Father.  Amazed, I looked, and I could not give myself a reason for what I was seeing; but a voice coming from the divine throne said:  “This is the elect among all the elect; She is the all beautiful; She is the only creature who gave Us Her will as gift, and left it, dead, upon Our knees, in Our hands.  And We, in exchange, gave Her the gift of Our Will.  Greater gift We could not give Her, because by acquiring this Supreme Will, She had the power to make the Word descend upon earth, and to have the Redemption of mankind be formed.  A human will would have no power nor attraction over Us; but a Divine Will, given by Ourselves to this incomparable creature, won over Us, conquered Us, enraptured Us; and unable to resist, We surrendered to Her petitions to make the Word descend upon earth.  Now We are waiting for you to come to die upon Our other knee, giving Us your will; and We, in seeing it dead in Our hands, as if it no longer existed for you, will give you the gift of Our Will, and through you – that is, through this Will of Ours given to you – Our Fiat will return to live upon earth.  These two wills, dead upon Our knees, will be the ransom for many rebellious wills, and We will keep them as a precious pledge, which will repay Us for all the evils of the other creatures, because with Our Will they will be able to satisfy Us.”

The voice could no longer be heard, and I found myself on the other paternal knee, in the act of breathing my last, and dying.  But at that moment I found myself inside myself, but I am unable to say what I felt within me; only, I prayed from the heart that my will might never again enter into me, but only the Divine might have life in me.  Ah! It alone is the bearer of all goods and the repeater of Jesus within souls; and echoing the Fiat of Creation, It embraces everything and everyone as though in one breath, and requites God for the work of Creation, Redemption and Sanctification.  The Divine Will operating in us can do anything; It is the true Queen who reigns and rules over everything.

Prayer for the Feast of Our Lady of Ransom

“O God, who by means of the most glorious Mother of Thy Son was pleased to give new children to Thy Church for the deliverance of Christ’s faithful from the power of the heathen; grant, we beseech Thee, that we who love and honor her as the foundress of so great a work may, by her merits and intercession, be ourselves delivered from all sin and from the bondage of the evil one. Through the same Christ, our Lord, Amen.

Permanent link to this article: https://bookofheaven.org/2014/09/24/feast-of-our-lady-of-ransom/