How to Make Jesus be Born in Our Hearts

Incarnation of the Word 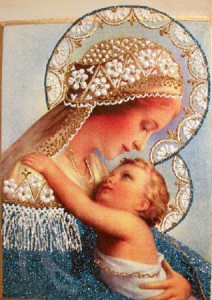 Now, my child, listen to Me. I continued my life in Nazareth; the Divine Fiat continued to expand Its Kingdom within Me. It used my most tiny acts, even the most indifferent ones – such as keeping the little house in order, starting the fire, sweeping, and all the acts which are usual in families – to let Me feel Its life palpitating in the fire, in the water, in the food, in the air I breathed – in everything. And investing my little acts, It formed over them seas of light, of grace, of sanctity; because wherever It reigns, the Divine Will has the power to form, even from little trifles, new heavens of enchanting beauty. Being immense, It does not know how to do little things, but with Its power It gives value to trifles, making of them the greatest things, such as to astonish Heaven and earth. Everything is holy, everything is sacred, for one who lives of Divine Will.

Your Mama felt ignited with love, and echoing the love of my Creator, I wanted to form one single sea of love, so that the Word might descend upon earth within it. My prayers were incessant, and while I was praying in my little room, an Angel came, sent from Heaven as messenger of the great King. He came before Me, and bowing, he hailed Me: “Hail, O Mary, our Queen; the Divine Fiat has filled You with grace. He has already pronounced His Fiat, for He wants to descend; He is just behind my shoulders, but He wants your Fiat to form the fulfillment of His Fiat.”

Oh, power of the Supreme Fiat! You raised Me so high as to render Me powerful, to the point of being able to create within Me that Humanity which was to enclose the Eternal Word, Whom Heaven and earth could not contain! The Heavens were shaken, and all Creation assumed the attitude of feast. Exulting with joy, they peeked over the little house of Nazareth, to give homages and obsequies to the Creator made man; and in their mute language, they said: “Oh, prodigy of prodigies, which only a God could do! Immensity has become little, power has made itself powerless, His unreachable height has lowered itself deep into the abyss of the womb of a Virgin and, at the same time, He is little and immense, powerful and powerless, strong and weak!”

My dear child, you cannot comprehend what your Mama felt in the act of the Incarnation of the Word. All pressed upon Me and awaited my Fiat, I could say, omnipotent.

Now, dear child, listen to Me: how much you should take to your heart doing the Divine Will and living of It! My power still exists: let Me pronounce my Fiat over your soul. But in order to do this, I want your own. One alone cannot do true good; the greatest works are always done between two. God Himself did not want to do it by Himself, but wanted Me together with Him, to form the great prodigy of the Incarnation. In my Fiat and in His, the life of the Man-God was formed; the destiny of mankind was restored, Heaven was no longer closed, and all goods were enclosed between the two Fiat. Therefore, let us say together, “Fiat! Fiat!”, and my maternal love will enclose in you the life of the Divine Will.

Enough for now; tomorrow I will wait for you again, to narrate to my child the continuation of the Incarnation.

Prayer of the soul:

Beautiful Mama, I feel stupefied in hearing your beautiful lessons. O please! I pray You to pronounce your Fiat over me; and I will pronounce my own, so that the Fiat which You so much yearn to reign as life in me, may be conceived within me.

Permanent link to this article: https://bookofheaven.org/2014/12/02/incarnation-of-the-word/