Prayers of the Servant of God, Luisa Piccarreta, to Visit Jesus 33 Times Each Day in the Sacrament 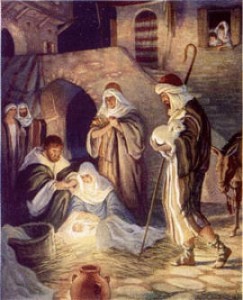 “My daughter, do you want to see how My inseparable Mama saw Me when I came out of Her Maternal Womb? Look at Me, and see.”

I looked at Him, and I saw Him as a tiny little Baby, of a Rare and Enrapturing Beauty. From the whole of His little Humanity, from His Eyes, from His Mouth, from His Hands and Feet, came out most Refulgent Rays of Light, that not only enveloped Him, but extended so much as to be able to wound each heart of creature, almost to give them the first greeting of His Coming upon earth—the First Knock, to Knock at the hearts, to have them open and ask for a shelter in them. That Knock was Sweet but Penetrating; however, being a Knock of Light, it made no clamor, and yet it made itself heard strongly, more than any sound.

So, on that night, all felt something unusual in their hearts, but very few were those who opened their hearts to give Him a little accommodation. And the tender Infant, in feeling Himself unrequited in His Greeting, and that no one was opening at His repeated Knocking, began His Crying with His Lips livid and shivering with cold; He Sobbed, Wailed and Sighed. But while the Light that came out of Him was doing all this with creatures, receiving the first rejections, with His Celestial Mama, as soon as He came out of Her Womb, He threw Himself into Her Maternal Arms to give Her the First Embrace, the First Kiss.

And since His little Arms could not reach to embrace Her completely, the Light that came out of His little Hands surrounded all of Her, in such a way that Mother and Son remained Invested with the same Light. Oh! how the Queen Mama requited Her Son with Her Embrace and Kiss; in such a way that They remained so clasped to each other as to seem Fused, one within the other. With Her Love, She compensated for the first rejection that Jesus received from the hearts of creatures, and the Dear and Charming little Baby placed His First Act of being Born, His Graces, His First Sorrow, in the Heart of His Mama, so that what was seen in the Son could be seen in His Mama.

Then, after this, the Gracious little Baby came into my arms, and as He squeezed me so very tightly, I felt Him Entering into me, and I into Him. And then He said to me: “My daughter, I wanted to Embrace you as I Embraced My Dear Mama as Newly Born, so that you too may receive My First Act of being Born and My First Sorrow, My Tears, My tender Wailings, that you may be moved to compassion for My Sorrowful State at My Birth. Had I not had My Mama in whom I could place all the Good of My Birth and Fix in Her the Light of My Divinity that I, Word of the Father, contained, I would have found no one in whom either to place the Infinite Treasure of My Birth, or to Fix the Light of My Divinity that Shone forth from My little Humanity.

“Therefore, see how necessary it is that, when the Supreme Majesty decides for a great Good to be done for creatures, that can serve as Universal Good, We choose one to whom to give so much Grace that she may be able to receive within herself all the Good that all others must receive. In fact, if others do not receive all of it or part of it, Our Work does not remain suspended and without its Fruit, but the chosen soul receives all of that Good within herself, and Our Work receives the return of its Fruit.

“So, My Mama was the depository, not only of My Life, but of all My Acts. Therefore, in all My Acts, first I looked to see whether I could deposit them in Her, and then I did them. In Her I deposited My Tears, My Wailings, the Cold and the Pains that I Suffered; and She Echoed all of My Acts, and with Incessant Thanksgivings She received everything. There was a Contest between Mother and Son—I in Giving, She in Receiving.

“As this little Humanity of Mine made Its First Entrance upon earth, My Divinity wanted to Shine forth from It, in order to go around everywhere and make the First Sensible Visit to all Creation. Heaven and earth—all received this Visit of their Creator, except for man. They had never received so much honor and glory as when they saw their King, their Maker, within their midst; all felt honored, for they were to serve Him from whom they had received their existence, therefore all made Feast. So, My Birth was of great Joy and Glory for Me on the part of My Mama and of all Creation; but it was for Me of great Sorrow on the part of creatures. This is why I have come to you—to feel the Joys of My Mama being Repeated in Me, and to Place in you the Fruit of My Birth.”

Permanent link to this article: https://bookofheaven.org/2014/12/11/enrapturing-beauty-of-jesus-at-his-birth-jesus-knocks-at-our-hearts/