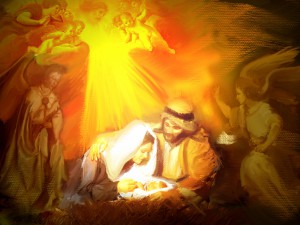 “My daughter, by sinning, the first man lost a Divine Will, and therefore My Humanity was needed, United with the Eternal Word, which was to sacrifice the human will of My Humanity entirely and completely in order to reacquire this Divine Will, so as to give It back to the creature.  So, My Humanity gave not even a breath of life to Its human will, but kept it only to sacrifice it, and to pay for the freedom that man had taken, of rejecting this Supreme Will with so much ingratitude; and as he lost It, all of Its Goods, Its Happiness, Its Dominion, Its Sanctity, failed him – everything failed him.  If man had lost something human given to him by God, a Saint could have rendered it back to him, but since he lost a Divine Will, another Man and God was needed, who would be able to give It back to him.

Now, had I come upon earth to redeem him, one drop of My Blood, one little pain of Mine would have been enough to put him in safety; but since I came not only to save him, but to give him back My Divine Will, which he had lost, this Divine Will wanted to descend into all My pains, into My tears, into My sighs and moans – into everything I did and suffered, in order to reacquire the Dominion in all and over all human acts, and therefore be able to form, once again, Its Kingdom in the midst of creatures.  So, as a little Child, when I cried, wailed, moaned, My Divine Will, more than solar ray, invested all Creation with My tears, with My moans and sighs.

The stars, the sun, the starry sky, the sea, the little flower – all cried, moaned, wailed and sighed, because the Divine Will present in Me was the same as That which Reigned in all Creation, and therefore, as though naturally, the stars cried, the sky moaned, the sun wailed, the sea sighed.  The Light of My Divine Will brought My Echo into all created things, and repeating My Acts, they kept company with their Creator.

Oh, if you knew the assault that the Divine Majesty received in hearing My crying, My moans and sighs in all Creation!  All created things, animated by My Divine Will, prostrate at the foot of the Divine Throne, deafened It with their moans, drew It with their tears, moved It to pity with their sighs and prayers; and my pains, reverberating in them, bound It to surrender the keys of Heaven, and implored that the Kingdom of the Divine Will come upon earth once again.  My Celestial Father, moved to Compassion and Tenderness by His Own Will that cried, moaned, prayed and suffered in all His Works, surrendered the Keys and gave His Kingdom once again.  But in order to be sure, He placed It in My Humanity, so that at the appropriate time He might give It back again to the human family.  Here is the necessity for Me to do the human actions and to descend into the order of the human actions – because My Divine Will was to take Its Dominion and substitute the order of Its Divine Will in all the acts of creatures.  See, then, how much this Kingdom cost Me, with how many pains I ransomed It.  This is why I love It so much, and I want to Establish It in the midst of creatures at any cost.”

Permanent link to this article: https://bookofheaven.org/2014/12/06/jesus-came-on-earth-not-only-to-redeem-man-but-to-give-back-to-man-the-divine-will/