Praise the Name of Jesus 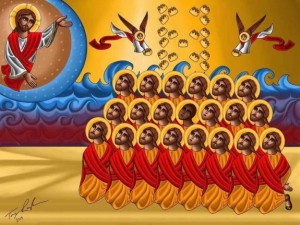 The Coptic Orthodox Church has announced that the murder of the 21 Egyptian Christians killed by the so-called Islamic State in Libya will be commemorated in its Church calendar.

Pope Tawadros II announced that the names of the martyrs will be inserted into the Coptic Synaxarium, the Oriental Church’s equivalent to the Roman Martyrology. This procedure is also equivalent to canonization in the Latin Church.

According to terrasanta.net, the martyrdom of the 21 Christians will be commemorated on the 8th Amshir of the Coptic calendar, or February 15th of the Gregorian calendar. The commemoration falls on the feast day of the Presentation of Jesus at the Temple.

Militants of the Islamic State released a gruesome video entitled “A Message Signed in Blood to the Nation of the Cross” in which they released a warning saying they were “south of Rome.” They then proceeded to behead the Christian men, some of whom were seen

Permanent link to this article: https://bookofheaven.org/2015/02/26/twenty-one-egyptian-martyrs/