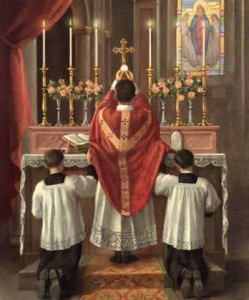 Below is an analogy of how the part of the Latin Mass relate to the Passion,  which was written over 200 years ago.

Calvary.
20 The Priest Continues to pray the Canon in a low voice – Christ Meets His Mother and the other pious women.

Permanent link to this article: https://bookofheaven.org/2015/02/23/meaning-of-the-ceremonies-at-latin-mass/