BOOK OF PRAYING THE ROUND – ORDINARY TIME 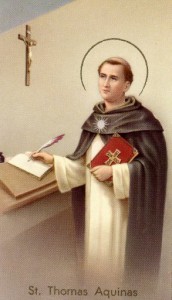 In June 1272, St. Thomas Aquinas agreed to go to Naples and start a theological studies program for the Dominican house neighboring the university. While he was still writing prolifically, his works began to suffer in quality.

During the Feast of St. Nicolas in 1273, St. Thomas Aquinas had a mystical vision that made writing seem unimportant to him. At mass, he reportedly heard a voice coming from a crucifix that said, “Thou hast written well of me, Thomas; what reward wilt thou have?” to which St. Thomas Aquinas replied, “None other than thyself, Lord.”

When St. Thomas Aquinas’s confessor, Father Reginald of Piperno, urged him to keep writing, he replied, “I can do no more. Such secrets have been revealed to me that all I have written now appears to be of little value.” St. Thomas Aquinas never wrote again.

V19 – July 1, 1926
My Will was to be a book for each step, for each act, a book for each created thing; the whole earth was to be filled with volumes of knowledges regarding the Kingdom of my Will, such as to surpass the number of created things.  Now, where are these books?  There is no book – only a few sayings are known about It, while It should be at the origin of each knowledge – of anything.  Being the life of each thing, It should be on everything, like the image of the king impressed on the currency that circulates in a kingdom; like the light of the sun that shines over each plant to give it life; like water that quenches the thirst of burning lips; like food that satiates the hungry man after a long fast.  Everything should be filled with the knowledges regarding my Will; and if it is not so, it is a sign that the Kingdom of my Will is not known, and therefore not possessed.

Afterwards, my sweet Jesus gathered all the books written by me on His Divine Will; he united them together, then He pressed them to His Heart, and with unspeakable tenderness, added: “I bless these writings from the heart. I bless every word; I bless the effects and the value they contain. These writings are part of Myself.”

Permanent link to this article: https://bookofheaven.org/2015/05/27/st-thomas-aquinas/