Month of June – Month of the Sacred Heart of Jesus

Feast of the Sacred Heart of Jesus 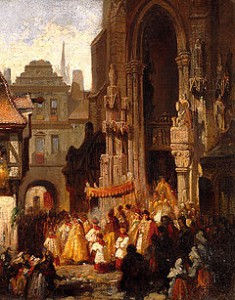 The Feast of Corpus Christi (Latin for Body of Christ), also known as Corpus Domini, is a Latin Rite liturgical solemnity celebrating the tradition and belief in the body and blood of Jesus Christ and his Real Presence in the Eucharist. It emphasizes the joy of the institution of the Eucharist, which was observed on Holy Thursday in the somber atmosphere of the nearness of Good Friday.

In the present Roman Missal, the feast is designated the solemnity of The Most Holy Body and Blood of Christ.[1] It is also celebrated in some Anglican, Lutheran, and Old Catholic Churches that hold similar beliefs regarding the Real Presence.

The feast is liturgically celebrated on the Thursday after Trinity Sunday or, “where the Solemnity of the Most Holy Body and Blood of Christ is not a holy day of obligation, it is assigned to the Sunday after the Most Holy Trinity as its proper day”.[1] At the end of Holy Mass, there is often a procession of the Blessed Sacrament, generally displayed in a monstrance. The procession is followed by Benediction of the Blessed Sacrament.

A notable Eucharistic procession is that presided over by the Pope each year in Rome, where it begins at the Archbasilica of St. John Lateran and makes its way to the Basilica of Saint Mary Major, where it concludes with Benediction of the Blessed Sacrament. – Wikipedia

After this, since it was the Feast of Corpus Domini, I was thinking to myself that that day was the feast of the marriage that blessed Jesus did with souls in the Most Holy Sacrament of Love.

And my Beloved Jesus, moving in my interior, told me: “My daughter, the true marriage with humanity was done in Creation. Nothing was lacking, either to the soul or to the body; everything was done with royal sumptuousness. An immense palace was prepared for the human nature, such that no king or emperor can have one similar to it, which is the whole universe: a starry heaven and its vault, a sun whose light would never be extinguished; flourishing gardens in which the happy couple, God and man, would stroll, amuse itself and maintain the continuous, uninterrupted feast of our marriage; and garments, woven not with matter, but formed of purest light by Our Power, as befitted royal persons.

“Everything was beauty in man, soul and body, because He who prepared the marriage and formed it was of an unreachable Beauty. So, from the external sumptuousness of the so many enchanting beauties present in the whole of Creation, you can imagine the internal seas of sanctity, of beauty, of light, of science, etc., that the interior of man possessed. All the acts of man, internal and external, were as many musical keys that formed the most beautiful melodies, sweet, melodious, harmonious, that maintained the joy of the marriage. And each additional act that he would dispose himself to do was a new little sonata that he would prepare, to call his Spouse to delight with him.

“My Divine Will, that dominated humanity, brought him the new continuous act and the Likeness of the One who had created him and married him. But, in such great feast, man broke the strongest bond, in which lay the whole validity of our marriage and through which it had been in force: he withdrew from Our Will. Because of this, the marriage was broken, and since all the rights were lost, only the memory of it was left, but the substance, the life, the effects no longer existed.

“Now, the Sacrament of the Eucharist in which My Love overabounded in all possible imaginable ways, cannot be called either the first or the true marriage of Creation, for I do nothing but the continuation of what I did while being on earth. According to the needs present in souls, with some I make Myself the compassionate doctor in order to heal them, with some the teacher to instruct them, with some the father to forgive them, with some light to give them sight. I give strength to the weak, courage to the timid, peace to the restless—in sum, I continue My redemptive Life and Virtue; however, all these miseries exclude the true marriage.

“No young man marries a young woman who is ill—at most, he waits for her to recover; or a young woman who is weak and who offends him very often. And if the groom is a king and loves her, at most he waits for the bride to get well, to love him, and for her condition to become somehow satisfactory, and not so inferior to his. Now, the condition in which poor humanity finds itself is still that of a poor ill one, and I am waiting for My Will to be known and to reign in the midst of creatures, for It will give them true health, royal garments, beauty worthy of Me. Then will I form again the true and original marriage.”

We (the little family of Luisa) will Joyfully Celebrate, in our own communities,

because we are linked to the Servant of God, Luisa Piccarreta

“. . . In this state of sufferings I (Jesus) will purify your soul thoroughly, in such a way as to dispose you to form a Mystical Marriage with Me; and after this, I (Jesus) will make the Last Transformation, in such a way that both of us will become like two candles placed on the Fire – one is Transformed into the other and they form a Single One.”

Then He added with more Loving Tenderness:

“My good daughter (Luisa), My Love wants to be tied more and more to (you) the creature, and the more Truths It (My Divine Love) Manifests regarding My Most Holy Divine Will, the more bonds I (Jesus) put between God and herself.

In Manifesting the Truth, My Divine Love is preparing the Marriage between God and the soul.

The more It Manifests the more Pomp and Magnificence this Marriage will have.

My Truths will be like the dowry needed in order to marry God; to get to know the One (God) who lowers Himself and even ties Himself—only for Love—in the bond of Marriage.

My Truths touch the creature over and over; They mold her to a New Life;

They (My Truths) return her to the Beauty of Our Image and Resemblance from the time she was Created, and Impress on her Their kiss of inseparable Union.

Just one of Our Truths can make a Sea of Prodigies and Divine Creations in the soul who has the goodness to listen to It.

One Truth can turn a perverted world into a Good and Holy one, because It is one of Our Lives, exposed for the Good of all.

It is a New Sun that We raise in created intellects; a Sun that will let Itself be known through Its Light and Heat, turning into Light and Heat whoever wants to listen.

Therefore, hiding a Truth that We give from Our Paternal Womb, with so much Love, is the greatest crime. It deprives human generations of the Greatest Good.

Further, one (Luisa and those linked to Luisa) who Lives in Our Most Holy Divine Will, by Marrying Us (Triune God), makes a Feast for all Saints.

All of them participate in this Divine Wedding and, because of It, they have their own party in Heaven and another one on earth.

Each act the creature does in Our Most Holy Divine Will is a Feast; a table sumptuously decked for the Heavenly Regions.

In return, the Saints give New Gifts.

They beseech the Lord to Manifest more Truths to the soul (Luisa), to broaden more and more the boundaries of the dowry that God gave to her (and to those linked to her.”)

“When one is linked to Luisa, one will also possess the Mystical Marriage because of her”

Permanent link to this article: https://bookofheaven.org/2015/06/03/feast-of-corpus-christi-2/