Feast of the North American Martyrs 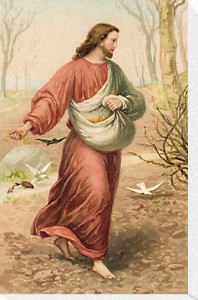 V28 – September 30, 1930 – “My daughter, all the good and holy acts of the prophets, the patriarchs, and of the ancient people, formed the ground in which the Supreme Being sowed the seed in order to make germinate the life of the Celestial Baby Mary, because Her seed was taken from the human stock. The Virgin, having within Herself the operating life of the Divine Will, expanded this ground with Her acts, fecundated it and divinized it. She made flow in it, more than beneficial and refreshing rain, the sanctity of Her virtues, the heat of Her love; and darting through it with the light of the Sun of the Divine Will that She possessed as Her own, She prepared the ground to germinate the Celestial Savior; and Our Divinity opened Heaven and made the Just One, the Holy One, the Word, rain down into this shoot. And so My Life was formed, human and Divine, to form the Redemption of mankind.

“See, then, in all Our works, directed for the good of creatures, We want to find a shelf, a place, a little ground in which to lay Our work and the good We want to give to creatures. Otherwise, where do We put it? In the air?—without one at least who would know it and would draw Us with her acts, forming her little ground; and We, as the Celestial Sower, sowing the good We want to give? If this were not so—that on both sides, Creator and creature, they feel drawn together: she, preparing herself to receive with her little acts; and God, by giving—it would be as if We did, or wanted to give, nothing to the creature. So, the acts of the creature prepare the ground for the Divine Sower. If there is no soil, there is no sowing to hope for; no one goes to sow if he does not have a little ground; much less does God, Celestial Sower, cast the seed of His Truths, the fruit of His works, if He does not find the little ground of the creature. The Divinity, in order to operate, first wants to place Itself in agreement with the soul; after We have agreed together and We see that she wants to receive that good, to the point of praying Us and forming for Us the ground in which to lay it—then, with all love, We give it. Otherwise, it would be like exposing Our works to uselessness.”

V30 – November 16, 1931 – “…each Act done by the Divine Will in the act of the creature is a Divine Seed that Germinates in her; the act prepares the soil in which My Will sows Its Seed, to make it Germinate into a Divine Plant. In fact, according to the seed that is sown into the womb of the earth, that is the plant that is born: if the seed is of flowers, the flower is born; if the seed is of fruit, the fruit is born.

“Now, My Divine Will sows a distinct Seed in each act of creature: in some It sows the Seed of Sanctity, in some the Seed of Love, in others the Seed of Goodness, and so forth. The more acts she does in It, the more soil she prepares in which My Will prepares Its Distinct Seed, to fill the earth with these human acts. So, one who lets herself be dominated by My Divine Will is Beautiful, is Striking; each of her acts, containing the variety of the Divine Seeds, is a note of her Creator: one act says Sanctity, another Mercy, others Justice, Wisdom, Beauty, Love. In sum, a Divine Harmony appears, with such order, that it shows the Finger of God Operating in her.

“Do you see, then, the necessity of the act of the creature in order for Us to be able to find the soil in which to enclose Our Divine Seed? Otherwise, where to sow it? As for Us, We have no soil; therefore she must form it for Us with her acts, so that, with Our Seeds, We may Germinate Our Divine Being in the creature. Therefore, one who does and Lives in Our Divine Will can be called she who Reproduces her Creator and Hosts within herself He who Created her.”

V35 – October 19, 1937 – “Our Will is the Fecundator and the Sower of Our Life. Where It finds souls disposed It Loves Itself, Fecundating them with Its Love—Sowing in them Its Divine Acts, that, United together, Form the Great Prodigy of the Divine Life in the creature. Therefore, Abandon yourself completely in My Will. Let It make of you whatever It Wants, and we’ll be Happy—you and Us.” 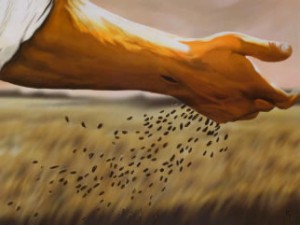 2 Corinthians 9:10 – And he that ministereth seed to the sower, will both give you bread to eat, and will multiply your seed, and increase the growth of the fruits of your justice:

Luke 8:5, 15 – The sower went out to sow his seed. And as he sowed, some fell by the way side, and it was trodden down, and the fowls of the air devoured it. [15]…But that on the good ground, are they who in a good and perfect heart, hearing the word, keep it, and bring forth fruit in patience.

Permanent link to this article: https://bookofheaven.org/2015/10/19/the-celestial-sower/