The Word Made Flesh, the Son of the Father, Formed the New Graft with the Tree of Humanity 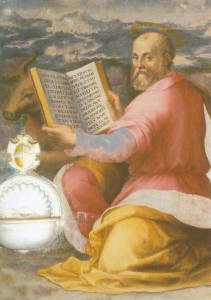 V23 – January 18, 1928 – “…I enjoy in seeing the interest that Priests take in these Writings that will form the Kingdom of My Will. This means that they appreciate the great good of them, and each one would want to keep such a great treasure with himself, to be the first to communicate it to others. And while the issue of who is going to win lasts, one approaches the other in order to consult one another on what to do. And I enjoy that more of My Ministers get to know that there is this treasure so great, of making known the Kingdom of My Divine Will; and I use this to form the first Priests of My coming Kingdom of My Fiat.

“My daughter, it is a great necessity to form the first Priests; they will serve Me like the Apostles served Me to form My Church; and the ones who will occupy themselves with these Writings in order to publish them, putting them out to print them—to make them known, will be the New Evangelists of the Kingdom of My Supreme Will. And just as the ones who are most mentioned in My Gospel are the four Evangelists who wrote It, to their highest honor and My Glory, so it will be for those who will occupy themselves with writing the knowledges on My Will in order to publish them. Like New Evangelists, there will be greater mention of them in the Kingdom of My Will, to their highest honor and My great Glory in seeing the order of the creature, the life of Heaven on earth—the only purpose of Creation—return into My bosom.

“Therefore, in these circumstances I expand the circle, and, like a fisherman, I catch those who must serve Me for a Kingdom so holy. Therefore, let Me do, and do not be worried.”

V24 – August 23, 1928 – “…The Truths about My Fiat are the New Gospel of the Kingdom of My Divine Will, in which they will find the norms, the Sun, the teachings on how to ennoble themselves, elevate themselves to their origin, and take the state given to them by God at the beginning of Creation. They will find the Gospel that, taking them by the hand, will lead them into true happiness, into constant peace. The only law will be My Will that, with Its brush of love, dipped in the vivid colors of Its light, will give back to man the Likeness of his Creator. Oh! how they should have yearned to receive and to make known a good so great. But, instead, all the opposite.

“In Redemption, the Evangelists considered themselves honored to make themselves known as the ones who were putting out the Gospel, that It might be known by the whole world; and with glory they marked their names, so much so, that when the Gospel is preached, the name of the one who wrote It is stated first, and then is the Gospel spoken. So I want it to be done with the Truths about My Will, that everyone may know who the ones are that brought so much good into the world.

539      The evangelists indicate the salvific meaning of this mysterious event: Jesus is the new Adam who remained faithful just where the first Adam had given in to temptation. Jesus fulfills Israel’s vocation perfectly: in contrast to those who had once provoked God during forty years in the desert, Christ reveals himself as God’s Servant, totally obedient to the divine will. In this, Jesus is the devil’s conqueror: he “binds the strong man” to take back his plunder.243 Jesus’ victory over the tempter in the desert anticipates victory at the Passion, the supreme act of obedience of his filial love for the Father. (397, 385, 609) CCC

Isaiah:  41:27 – The first shall say to Sion: Behold they are here, and to Jerusalem I will give an evangelist.

2 Timothy 4:5 – But be thou vigilant, labour in all things, do the work of an evangelist, fulfill thy ministry. Be sober.

Permanent link to this article: https://bookofheaven.org/2015/10/18/the-priests-are-the-evangelists-of-the-divine-will/