Helping the Souls in Purgatory

The Power in Thanking God

God’s Currents of Love were to Run in man 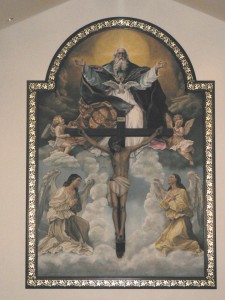 V14 – November 20, 1922 – I was thinking of how My sweet Jesus suffered many pains when He was in the Garden – but not on the part of creatures, since He was alone, or rather, abandoned by all, but on the part of His Eternal Father. There were Currents of Love between Him and the Celestial Father, and in these Currents all creatures were placed. In these Currents there was all the Love of a God for each one of them, and all the Love that each of them owed God. And since this was missing, He arrived at suffering such pains as to surpass all other pains, to the point of sweating Living Blood. And My sweet Jesus, pressing me to His Heart to be relieved, told me: “My daughter, the pains of Love are the most excruciating. See, in these Currents of Love between Me and My Father there is all the Love that all creatures owed Me, and therefore there is betrayed Love, denied Love, rejected Love, unknown Love, trampled Love, etc. Oh, how piercingly it reaches My Heart, to the point that I feel I AM dying!

With sin he broke all these Currents, and remained separated from Me. Do you know how this happened? Look at the sun: all of its light hits the surface of the earth and invests it so much as to make it feel its heat, so alive and real as to bring fecundity and life to everything which the earth produces. So, one can say that the sun and the earth are in communication with each other. Oh, how much tighter are the communications between man and Myself, True Eternal Sun!

Now, if a creature could have the power to break, between the earth and the sun, the current of light that hits the surface of it, what harm would he not do? The sun would withdraw all the current of light into itself; the earth would remain in the dark, without fecundity and without life. What penalty would he not deserve? Man did all this in Creation, and I Descended from Heaven to earth in order to reunite all these Currents of Love, but – oh, how much it cost Me! And man continues with his ingratitude, and returns to break the Currents Repaired by Me!”

Permanent link to this article: https://bookofheaven.org/2015/11/04/gods-currents-of-love-were-to-run-in-man/