On the Cross the Soul Can Measure the Love of God

The Power of the Divine Will in the Cross 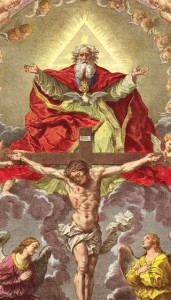 V17 – July 25, 1924 – This morning my sweet Jesus made Himself seen in my interior in the act of stretching His arms in the shape of the cross, and I remained stretched together with Him. Then He said to me: “My daughter, the last act of My Life was to lay Myself on the cross and to stay there until I died, with My Arms opened, unable to move or to oppose what they wanted to do to Me. I was the True Portrait, the True Image, of one who lives, not in the human will, but in the Divine. Being unable to move, having lost every right over Myself, the horrible tension of My Arms…how many things they said! And while I was losing My Rights, the others Acquired My Life.

The First Right was of the Supreme Will, which, using Its Immensity and All-Seeingness, gathered all souls – innocent and penitent sinners, good and contrite wicked – and placed them in My stretched Arms, so that I might bring them to Heaven. And I refused no one. So, the Divine Will gave a place to everyone in My Arms.

The Supreme Will is a Continuous Act, which is never interrupted, and what It does once, It never ceases. And although My Humanity is in Heaven and is not subject to suffering, I go in search of souls who act not in the human will, but in the Divine, and who oppose nothing; souls who lose each one of their rights, so that, leaving all of their rights at the Mercy of My Will, My Will may continue Its Act of placing all souls – sinners and saints, innocent and evil – in the arms of those who offer to lay themselves in My Divine Will, in order to repeat and continue what my arms did, stretched on the Cross. This is why I laid Myself within you – so that the Supreme Will may continue Its Act of bringing all into my arms.

V17 – August 9, 1924 – After much waiting for the presence of my adorable Jesus, I felt Him in my interior, extending His arms and saying to me: “My daughter, extend your arms together with Me, in My Will, to repair for many who lay their works in the human will, which forms for them the net of all evils that makes them fall into the eternal abyss, and to prevent My Justice from pouring upon them in order to vent Its Just Fury. In fact, when the creature lays herself in My Will in order to work and to suffer, My Justice feels touched by the creature with the Power of My Will, and it ceases Its Just Rigors. And so a Divine Vein comes out, which the creature makes flow between God and the human family; and because of it, My Justice cannot help having regard for poor humanity.”

V17 – January 4, 1925 – “My daughter, how can it not be important to Make it Known that Fusing oneself in My Divine Will is to Live in It? The soul who Fuses herself in My Will receives, as though in deposit, all My Divine and Eternal Goods. The very Saints compete with each other in order to deposit their merits in the soul Fused in My Will, because they feel in her the Glory, the Power of My Will, and feel Glorified in a Divine Manner by the littleness of the creature.

Listen, My daughter: to Live in My Will Surpasses even Martyrdom in merit. Martyrdom kills the body, but Living in My Will implies that the creature kills her own will with a Divine Hand, and It gives her the Nobility of a Divine Martyrdom. And every time the soul decides to Live in My Divine Will, My Volition prepares the blow in order to kill the human will, and forms the Noble Martyrdom of the soul. But in order to reach this happy state, the human will and the Divine Will Must be tied together: one has to give the place to the Other, and the human will Must be content with remaining extinguished under the Power of the Divine Will. Therefore, every time you dispose yourself to Live in My Volition, you dispose yourself to undergo the Martyrdom of your will.”

V17 – 8.4.25 – “My daughter, you must die continuously.” And while he was saying this, He made me share in various pains. Then, assuming a more affable look, added: “My daughter, what do you fear, if the Power of My Divine Will is in you? It is so true that My Will is in you, that in one instant It transformed you into My Pains, and you offered yourself to receive them with Love. While you were suffering, you stretched out your arms to Embrace My Will; and as you Embraced It, everything that Lives in My Will – the Angels, the Saints, My Celestial Mama, and the very Divinity – felt the grip of your Embrace, and they all ran toward you to Embrace you; and in chorus, they said: ‘How pleasing and dear is the Embrace of our little exiled, who lives on earth in order to do the Will of God Alone, just as we do it in Heaven! She is our Joy; she is the New and Only Feast which comes to us from the earth.’

Oh, if you knew what it means for a soul to Live in My Will! There is no division between her and Heaven. Wherever My Will is, she is. Her acts, her pains, her words, are in act and Operative in every place in which My Will is. And since My Will is everywhere, the soul places herself in the Order of Creation, and through the Electricity of the Supreme Will, she is in Communication with all Created things. Just as the Created things are in Order and Harmony among themselves, each one is the support of the other, and not one of them can move; and if even one thing created by Me moved – may this never be – the Creation would become all upset; there is a Secret Accord among them, a Mysterious Force, such that, while all the Spheres Live in the space, suspended in the air, without any support, by the power of communication which they have among themselves, each thing sustains the other – in the same way, one who does My Will is in Communication with all, and is Sustained by all the Works of her Creator. Therefore, everyone Recognizes her, Loves her, and Offers her the Electricity, the Secret, in order to Live Together with them, Suspended between Heaven and earth, All Sustained Only by the Power of the Divine and Supreme Will.”

Permanent link to this article: https://bookofheaven.org/2015/11/17/the-power-of-the-divine-will-in-the-cross/