Mary, Queen of the Church and Most Beautiful Symbol of the Kingdom of the Divine Will 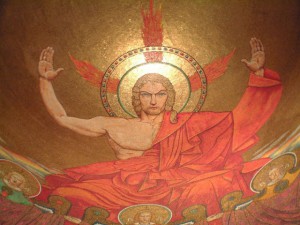 V17 – June 20, 1924 – “…Only one who Possesses Our Will can touch Us Lovingly, and can become one with Us, because in this way the creature would be Happy of Our Own Happiness, and so We remain Glorified by the Happiness of the creature.

Only when My Divine Will shall Reign in the creature in a Complete Way, then will Charity reach Complete Perfection in the creature, because, then, by Virtue of My Will, everyone will be found in every creature, Loved, Defended and Sustained, just as her Creator Loves her, Defends her and Sustains her. Each one will be Transfused in the other, as in one’s own life. Then, All Virtues will reach Complete Perfection, because they will not be Nourished by human life, but by Divine Life.

V21 – March 31, 1927 – “My daughter, you do not know how My Burning Heart wants to run with Love toward creatures. But while it runs, they reject It, while they run toward Me with the most brutal offenses and with the most horrendous pretenses. So, as My Love sees itself being persecuted, My Justice Enters the Field and Defends My Love, striking with scourges those who persecute Me, and uncovering the pretenses they make—not only with Me, but also among themselves as nations, because, in brawling, they reveal themselves—that instead of Loving one another, they hate one another fiercely.

“This century can be called the century of the most awful pretenses—and among all classes; and this is why they never come to an agreement among themselves, and while apparently it seems that they want to agree, in reality they are plotting new wars. Pretense has never brought True Good, either in the civil order or in the religious order; at the most, a few shadows of a fleeting Good. And so, here is how they are converting that Peace, so praised with words, but not with deeds, into preparations for war. As you can already see, many different races have united to fight, some with one pretext, some with another—and more will unite together.

Permanent link to this article: https://bookofheaven.org/2015/11/18/divine-justice-enters-the-field-and-defends-gods-love/