Jesus is Drawn by and is the Receptacle of Pure Souls

God’s Last Sign of Love at the Point of Death 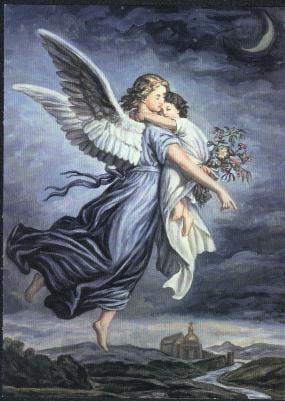 Wisdom 1:12-14 “Seek not death in the error of your life, neither procure ye destruction by the works of your hands. For God made not death, neither hath he pleasure in the destruction of the living. For he created all things that they might be..”

V35 – March 22, 1938 – “Now, My daughter, until the guilt starts in the creature, everything is My Will; and as the guilt begins, so the tears and Pains of this Celestial Mother begin. O, how It sadly misses Its child. But It doesn’t leave him, Its Love binds It to Live in that creature to give her Life, and although It feels Its Divine Life as if suffocated, and maybe not even known or loved, the Love of My Will is so Great that It follows her life, regardless of any offense, to make a Surprise of Love and save Its child. Our Goodness and Our Love are such that We use all the ways and all the means to pull him away from sin—to save him; and if We do not succeed during his life, We make the last Surprise of Love at the moment of his death. You must know that, in that moment, We give the last sign of Love to the creature, providing her with our Graces, Love and Goodness, and placing so many Tendernesses of Love as to soften and win the hardest hearts. When the creature finds herself between life and death—between the time that is about to end, and the Eternity that is about to begin—almost in the act of leaving her body, I, your Jesus, make Myself seen, with an Amiability that Enraptures, with a Sweetness that chains and sweetens the bitterness of life, especially in that extreme moment. Then, with My Gaze, I look at her, but with so much Love as to pull from her an act of contrition—one act of Love, one adhesion to My Will.

“In that moment of disillusion, in seeing—in touching with her hands how much We Loved her, and do Love her, the creature feels so much pain that she repents for not having loved Us; she recognizes Our Will as Principle and Completion of her life and, as satisfaction, she accepts her death, to accomplish one act of Our Will. In fact, you must know that if the creature did not do even one Act of the Will of God, the doors of Heaven would not be opened; she would not be recognized as Heiress of the Celestial Fatherland, and the Angels and the Saints could not admit her in their midst—nor would she want to enter, being aware that it does not belong to her. Without Our Will there is no Sanctity and no Salvation. How many are saved by virtue of this sign of Our Love, with the exception of the most perverted and obstinate; although even following the long path of Purgatory would be more convenient for them. The moment of death is Our Daily Catch—the finding of the lost man.”

Then, He added: “My daughter, the moment of death is the time of disillusion. In that point, all things present themselves, one after the other, to say: ‘Good-bye, the earth is over for you; now Eternity begins for you… It happens to the creature just as when she is locked inside a room and someone says to her: ‘Behind this room there is another room, in which there is God, Heaven, Purgatory, Hell; in sum—the Eternity.’ But she cannot see anything of these things. She hears them being asserted by others; but those who say them cannot see them either, so they speak in a way that is almost not credible; not giving great importance to making all their words believed as reality—as something certain.

“So, one day the walls fall down, and she can see with her own eyes what they had told her before. She sees her God and Father, Who Loved her with Great Love; the Gifts that He had given to her, one by one; and all the broken Rights of Love that she owed Him. She sees how her life belonged to God, not to herself. Everything passes before her: Eternity, Paradise, Purgatory, and Hell—the earth running away; the pleasures turning their back on her. Everything disappears; the only thing that remains present to her is in that room with fallen walls: the Eternity. What a change for the poor creature!

“My Goodness is such, wanting everyone saved, that I allow the falling of these walls when the creatures find themselves between life and death—at the moment in which the soul exits the body to enter Eternity—so that they may do at least one act of contrition and of Love for Me, recognizing My Adorable Will upon them. I can say that I give them one hour of Truth, in order to rescue them. O, if all knew My Industries of Love, that I perform in the last moment of their life, so that they may not escape from My more than Paternal Hands—they would not wait for that moment, but they would love Me all their life.”

Permanent link to this article: https://bookofheaven.org/2015/11/28/gods-last-sign-of-love-at-the-point-of-death/