Gentle Dominion of the Divine Will 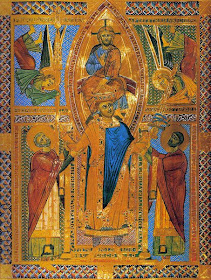 Today’s saint in the Roman EF calendar, St Henry, actually has a strong Benedictine connection: indeed, Pope St Pius X declared him the patron saint of the Benedictine Oblates. Quite why he doesn’t feature in the 1962 Benedictine calendar is therefore a mystery…

According to Catholic Online:

“The saint was probably born in Hildesheim, Bavaria, Germany, on May 3, 973. When his father died he became the duke of Bavaria in 995 and emperor in 1002 when his cousin Otto III died. His wife was St. Cunegundis, and St. Herisbert was his chancellor. A patron of the Benedictines, he was crowned Holy Roman Emperor by Pope Benedict VIII. He was also miraculously cured by St. Benedict. Tradition states that Henry wanted to be a Benedictine and lived as an Oblate. He was canonized in 1146 by Pope Eugene III.”

Permanent link to this article: https://bookofheaven.org/2016/07/13/st-henry-ii-patron-of-benedictine-oblates-july-15/