In Creation God Separated Water, Land and Ordered all in the Eternal Fiat

Divine Royalty of the Soul Who Lives in the Divine Will 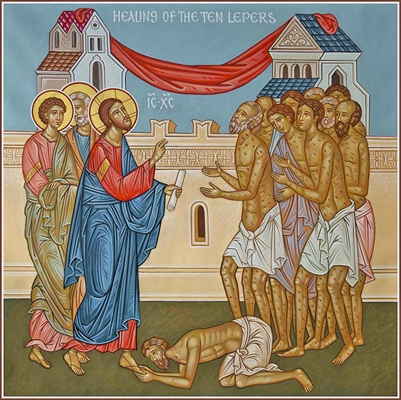 The Gospel teaches us to say a heartfelt thanks, to express our gratitude for the gifts we have received from God. Everything comes from Him. The Bible texts present  the theme of faith that has no racial, cultural and social boundaries. So, the  Samaritan leper and Naaman  arrive at true faith.

Ten lepers going to meet Jesus and they shout at a distance. Leprosy is a terrible and devastating disease, which spoils the body, spirit and relationships. One of the ten lepers is a foreigner, he is an enemy, a Samaritan.

But disease and sorrow compare all men, without distinction. Suffering is common to all. They shout their pain, their abandonment, their prayer. Jesus asks them to go to the priests to be healed.

Healing is not immediate, it requires a path by us and trust; God does not love the striking miracles, He always asks for awareness, walk, trust. The ten lepers walk and while they are walking, they realize they have been healed. Amazed, shocked, the lepers that have been healed fulfill the request of Jesus and go to the priest. Except one, he who has no temple, no priests, no official religion. Humanly, the Samaritan does not know where to go so he goes back . He comes back to Jesus.

Only one, full of faith, returns to thank. Jesus verify that ten were healed, but only one was saved. He speaks with sorrow. Once they have been healed, the differences adds up: nine go to the temple and the Samaritan, alone again, without a temple where he can be accepted, runs to the temple of the glory of God that is Jesus.

The Samaritan  comes back praising God in a loud voice. He can not remain silent, He shouts of joy: his loneliness and marginalization have finally stopped. Jesus asks: and the others?

Healing men from their ingratitude is more difficult than healing them from their diseases. Ingratitude means not to realize what the Lord gives to every man and it is a sign of man’s presumption.

January 6, 1928 Jesus, talking to Luisa about the immensity of living in the Divine Will, explains that the creature doesn’t Know how great is this gift and how ingratitude prevents the Divine Will from reigning in it.

God’s Will is immense and in bringing forth creatures to the light of day they remained in His same Will, as so many little residences formed in It, in which the Divine Volition by right should have the regime and the carrying out of Its life in each one of these little residences, but while for goodness and Its liberality It gave the space and all that which was necessary in order to form these little residences in It, creatures with horrendous ingratitude don’t want to give the right of letting the Divine Volition live in them, and with so many residences that It has formed in It, how many the creatures are, It holds the sorrow of remaining without residences, because they don’t give It entrance to live in them.

And yet neither the sea, nor the sun has given them life, but only the space; instead the Divine Will has given life and space to these residences of creatures in It, because there is no point where one doesn’t find It, nor life that from It doesn’t go forth, hence the sorrow of God’s Will for who doesn’t let It dominate is immense and incalculable, to feel these lives in Itself throbbing, to form the heartbeat itself and to remain outside as estranged, as if they might not pertain to It, and the affront and monstrosity of those people that don’t let It reign, it is so very great, that it would merit a life sentence and destruction.. Not doing the Divine Will seems nothing to creatures, instead it is a very great evil and an ingratitude so black, that is there is no other evil that resembles it

Gratitude, feast, wonder, however, are attitudes that are natural to man, yet they are shown too little in our lives.

Gratitude is the key that allows us to open, as we like, the treasures that God contains.

We complain a lot and are always ready to highlight the negative. We take everything for granted: it is normal to exist, live, breathe and love; It is normal and owed to feed, wash, live, work … Our eyes, accustomed to expected and owed things, no longer Know how to open up to gratitude.

A writer said, echoing a bit the words of Pope Francis: “How I wish I could see someone that comes out of churches – at least occasionally – praising God in a loud voice … How I wish I could see more smiles on the lips of Christians, more praises in their prayers, more gratitude in the acts of those who, healed from their inner loneliness and leprosy, that is sin, are also saved and made Children of God. “

To be healed doen’t mean to be saved. The nine ungrateful are the perfect icon of a popular Christianity, that turns to God as to a powerful healer to be invoked in times of trouble. Those who turn to God when they need invent a sad picture; they leave God far from their choices, their family, but then they get angry and talk about Him when something goes wrong in their projects.

Nine were healed: they got what they asked for, but they have not been saved. They remained locked in their partial and distorted view of God, though they have been healed of leprosy on the skin, they don’t see the leprosy in their hearts. It ‘s important to come to the true faith, we must not stop at a relationship with God on matters that concern material things or health.

Jesus tells us that health, although it is important, is not all. Salvation is far more than health.

Happiness is to open our heart to gratitude of a God who heals us in the soul from all loneliness and suffering. Healing reaches the Samaritan in body and soul: he, grateful, has been saved. ” Stand up and go; your faith has saved you”.

Permanent link to this article: https://bookofheaven.org/2016/10/09/xxviii-sunday-in-ordinary-time/