Gospel Reading for Nov. 4, 2016 With Divine Will Truths – Looking to the Future

Gospel Reading for Nov. 7, 2016 with Divine Will Truths-Luisa Prays for Forgiveness

Eternity, the time of God’s infinite love which is given to our hearts . 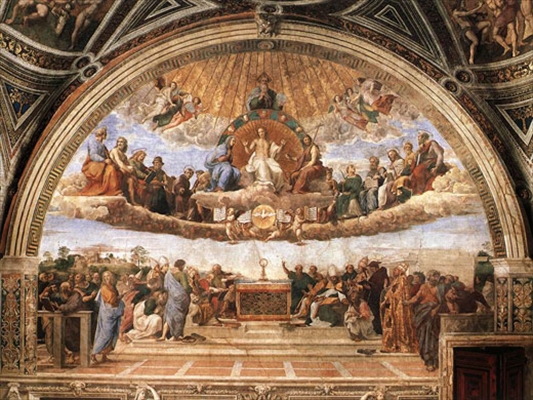 The Jewish people, throughout its history, as the Bible shows us, at different times, opened to faith in eternal Life. We arrive to this certain faith through the book of Maccabees, of which we read a little passage, today. Then Jesus, will do nothing  other than speak about eternal life and the value of life on earth with a view to the life after death. Jesus lived, died and rose again to save us, to make us children of God on this earth and forever, in order to merit eternal Life.

” I go to prepare a place for you, I will take you to myself, that where I am you may be also..” The full text of the Book of Maccabees, presents a touching exhortation to martyrdom by the mother to her youngest son.

The one who better than anyone is aware of the mystery of human life, of the miraculous formation of a new life in the womb, is best placed to understand holiness and therefore the eternity of this life. The two are not without connection. Today, even among Christians, the long journey of Israel has been, at times, forgotten and we risk coming back.

At least according to surveys, a significant percentage of people say they believe that life continues after death in a vague and indistinct manner. Some people even do not believe in a life after death, even though they call themselves Christians. And it is our not Christian society that began to no longer be surprised about the mystery of new life.

If we want to recover the true meaning of eternity and of our faith in life after death, it is right to come back to the words, full of emotion, of the mother of the Maccabees, “I do not know how your life began in my womb, I was not the one who gave you life and breath and put together each part of your body. It was God who did it, God who created the universe, the human race, and all that exists. He is merciful and he will give you back life and breath again, because you love his laws more than you love yourself”.

The gospel, through the question of the Sadducees, shows the difficulty of growing in faith in eternal life. In Jesus’ time this religious group within Judaism, that was more conservative than the Pharisees, did not believe in the resurrection, nor in a true life after death.

For this reason  they tried to oppose Jesus’ teaching on the resurrection and on  life after death using the weapon of the ridiculous. The example of women with seven ex-husbands appears as a well conceived trap to ridicule faith in eternal life and, however,  it works very well, as all the arguments that try to see the eternal life only as a continuation of this life.

Who thinks about eternal life becoming caught up in the logic, often twisted, of this our earthly life, marked by selfishness and sin, can’t understand its mystery.

The Sadducees, by their example, didn’t keep anything of the mystery of love that unites a man to a woman, a love that if it is sincere, manages to exceed the limits of death. For them the question was about property. As according to Jewish law the wife belonged to her husband, at the resurrection whose wife will the woman of the story be? Jesus overturned their twisted and worldly logic.

At the resurrection people will neither marry nor be given in marriage; as indeed, Jesus will say, this should not happen even in this life. among Christians Love  liberates and is a gift, like the one that joins the angels of heaven to God and to us.

Jesus’ answer does not discuss whether or not there are in the resurrection bonds of love or if the bonds of love that have joined us together in this life continue. Therefore, Jesus refuses that people can talk about resurrection in too worldly a manner, in terms of possession and conquest, of ownership and claim of their own  legal rights against the other.

The only possible language to speak of resurrection and eternal life, is the language of God and of the angels, the language of love, of the generous giving of  self- and especially of faith, which marvels at the greatness of God’s work: from birth to death and beyond death, for all eternity. We see, then, how from this text of the Gospel, which seems, at first glance, a bit difficult, we can draw a deep and fruitful teaching, for the true faith in eternity, the time of God’s infinite love which is given to our hearts .

In Luisa’s writings, Jesus speaks a lot about eternal life as life in the Divine “Fiat”. In a passage of April 12, 1928, Jesus compares the Calvary to the “new Eden”, in which mankind was given back that which it lost by withdrawing from the Divine Will.

In Eden, Heaven was closed to man, he lost his happiness and rendered himself the slave of the infernal enemy. In the new Eden, Heaven was opened once again to him, he reacquires the lost peace and happiness, the devil is chained, while man is freed from his slavery.

In Eden, the Sun of the Divine Fiat darkened and it became always nighttime for man – symbol of the Sun which withdrew from the face of the earth during the three hours of Jesus’ terrible agony on the Cross. Unable to sustain the torment of His Creator -caused by the human will which, with great perfidy, had reduced His Humanity to that state – horrified, the Sun withdrew, and as He breathed His last, it reappeared once again and continued its course of light.

In the first Eden man receives the condemnation to death of soul and body; while in the second Eden he is released from his condemnation, and the resurrection of the body is reconfirmed through the resurrection of Jesus’ Humanity. There are many relations between Eden and Calvary – that which man lost there, he reacquires here. In the kingdom of Jesus’pains everything is given back, and the honor and the glory of the poor creature is reconfirmed by means of His pains and of His  death.

By withdrawing from God’s Will, man formed the kingdom of his evils, of his weaknesses, passions and miseries; and the Son of God wanted to come upon earth, He wanted to suffer greatly, He  permitted that His Humanity be lacerated, Its flesh torn to pieces, all full of wounds. And He wanted even to die in order to form, by means of His many pains and of His death, the kingdom opposite to the many evils that the creature had formed for herself. A kingdom cannot be formed with one act alone, but with many upon many acts; and the more the acts, the greater and more glorious the kingdom becomes. Therefore, Jesus’ death was necessary to His Love; with His death He was to give the kiss of life to creatures, and from His many wounds He was to let all goods out, in order to form the kingdom of goods for creatures. So, His wounds are springs which gush with goods, and His death is spring from which life for all gushes forth.

If  Jesus had not risen again, the creature could not have risen once again in the Divine Fiat; she would have lacked the virtue – the bond of her resurrection in His, and Jesus’ love would have felt incomplete. It would have felt It could do something more but It was not doing it, and so He would have remained with the harsh martyrdom of a love that is not complete.

Permanent link to this article: https://bookofheaven.org/2016/11/06/xxxii-sunday-in-ordinary-time/