Gospel Reading for May 2, 2017 with Divine Will Truths – Three Breads Jesus Prayed for in the ‘Our Father’ 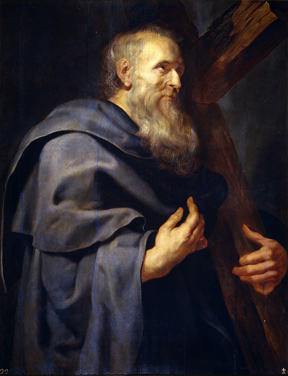 Two of the favored witnesses of our Beloved Jesus’ Resurrection come before us today. Sts. Philip and James are here, bearing testimony to us that their Master is truly risen from the dead, that they have seen Him, that they have touched Him, that they have conversed with Him (1 John 1: 1), during these forty days. And, that we may have no doubt as to the truth of their testimony, they hold in their hands the instruments of the martyrdom they underwent for asserting that Jesus, after having suffered death, came to life again and rose from the grave. St. Philip is leaning upon the cross to which he was fastened, as Jesus had been; St. James is holding the club wherewith he was struck dead.

St. Philip preached the Gospel in the two Phrygias, and his martyrdom took place at Hierapolis. He was married when he was called by our Savior; and we learn from writers of the second century that he had three daughters, remarkable for their great piety, one of whom lived at Ephesus, where she was justly revered as one of the glories of that early church.

St. James is better known than St. Philip. He is called in Sacred Scripture, the brother of the Lord (Gal. 1: 19 and elsewhere), on account of the close relationship that existed between his own mother and the Blessed Mother of Jesus. (He is also called James the Less, to distinguish him from James the Greater—who was the brother of St. John, and of greater bodily stature.) He claims our veneration during Paschal Time, inasmuch as he was favored with a special visit from our Risen Lord, as we learn from St. Paul (1 Cor. 15: 7). There can be no doubt but that he had done something to deserve this mark of Jesus’ predilection. St. Jerome and St. Epiphanius tell us that our Savior, when ascending into Heaven, recommended to St. James’ care the Church of Jerusalem, and that he was accordingly appointed the first Bishop of that city. The Christians of Jerusalem, in the fourth century, had in their possession a chair on which St. James used to sit when he assisted at the assemblies of the faithful. St. Epiphanius also tells us that the holy Apostle used to wear a lamina of gold upon his forehead as the badge of his dignity. His garment was a tunic made of linen.

He was held in such high repute for virtue that the people of Jerusalem called him the Just; and when the time of the siege came, instead of attributing the frightful punishment they then endured to the deicide they or their fathers had committed, they preferred to think of it as a consequence of the murder of St. James, who, when dying, prayed for his people. The admirable Epistle he has left us bears testimony to the gentleness and uprightness of his character. He there teaches us, with the eloquence of an inspired writer, that works must accompany our faith if we would be just with that justice which makes us like our Risen Lord.

The bodies of Sts. Philip and James repose in the Basilica of the Holy Apostles in Rome. These relics are counted as one of the richest treasures of the Holy City, and there is reason to believe that the first day of May (which was formerly the date of this Feast), is the real anniversary of their translation. For a long period the Church of Rome kept special Feasts in honor of only four of the Apostles: Sts. Peter and Paul, St. John the Evangelist, and St. Andrew (the brother of St. Peter); the rest were united in the solemnity of June 29, and a vestige of this is still to be found in the office of that day, as we have seen. The reception of the bodies of Sts. Philip and James, which were brought from the East somewhere about the sixth century, gave rise to the institution of today’s Feast; and this led gradually to the insertion into the Calendar of special Feasts for the other Apostles and Evangelists.