Gospel Reading for June 28, 2017 with Divine Will Truths – Wolves in Sheep’s Clothing

Your Cross – St. Frances de Sales and Truths from the Book of Heaven 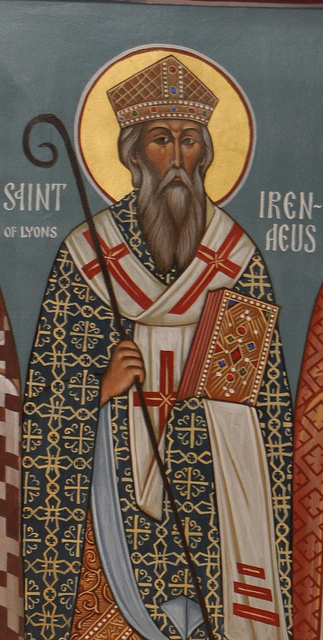 Bishop of Lyons, and Father of the Church

Information as to his life is scarce, and in some measure inexact. He was born in Proconsular Asia, or at least in some province bordering thereon, in the first half of the second century; the exact date is controverted, between the years 115 and 125, according to some, or, according to others, between 130 and 142. It is certain that, while still very young, Irenaeus had seen and heard the holy Bishop Polycarp (d. 155) at Smyrna. During the persecution of Marcus Aurelius, Irenaeus was a priest of the Church of Lyons. The clergy of that city, many of whom were suffering imprisonment for the Faith, sent him (177 or 178) to Rome with a letter to Pope Eleutherius concerning Montanism, and on that occasion bore emphatic testimony to his merits. Returning to Gaul, Irenaeus succeeded the martyr Saint Pothinus as Bishop of Lyons. During the religious peace which followed the persecution of Marcus Aurelius, the new bishop divided his activities between the duties of a pastor and of a missionary (as to which we have but brief data, late and not very certain) and his writings, almost all of which were directed against Gnosticism, the heresy then spreading in Gaul and elsewhere. In 190 or 191 he interceded with Pope Victor to lift the sentence of excommunication laid by that pontiff upon the Christian communities of Asia Minor which persevered in the practice of the Quartodecimans in regard to the celebration of Easter. Nothing is known of the date of his death, which must have occurred at the end of the second or the beginning of the third century. In spite of some isolated and later testimony to that effect, it is not very probable that he ended his career with martyrdom. His feast is celebrated on 28 June in the Latin Church, and on 23 August in the Greek.

Permanent link to this article: https://bookofheaven.org/2017/06/28/st-irenaeus-bishop-and-martyr-june-28/