Gospel Reading for August 28, 2017 with Divine Will Truths – Hypocrisy Embitters the Heart of Jesus 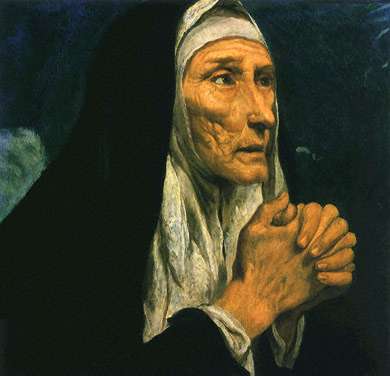 Saint Monica, also known as Monica of Hippo, is St. Augustine of Hippo’s mother. She was born in 331 A.D. in Tagaste, which is present-day Algeria.

When she was very young, she was married off to the Roman pagan Patricius, who shared his mother’s violent temper. Patricius’ mother lived with the couple and the duo’s temper flares proved to be a constant challenge to young Monica.

While Monica’s prayers and Christian deeds bothered Patricius, he is said to have respected her beliefs.

Three children were born to Monica and Patricius: Augustine, Navigius, and Perpetua. Unfortunately, Monica was unable to baptize her children and when Augustine fell ill, Monica pleaded with Patricius to allow their son to be baptized.

Patricius allowed it, but when Augustine was healthy again, he withrew his permission.

For years Monica prayed for her husband and mother-in-law, until finally, one year before Patricius’ death, she successfully converted them.

As time passed, Perpetua and Navigius entered the religious life, but unfortunately Augustine became lazy and uncouth. This greatly worried Monica, so when Patricius died, she sent the 17-year-old Augustine to Carthage for schooling.

While in Carthage, Augustine became a Manichaean, which was a major religion that saw the world as light and darkness, and when one died, they were removed from the world of matter and returned to the world of light, which is where life comes from.

After Augustine got his education and returned home, he shared his views with Monica, who drove him from her table. Though it is not recorded how much time passed, Monica had a vision that convinced her to reconcile with her wayward son.

Monica went to a bishop, who told her, “the child of those tears shall never perish.”

Inspired, Monica followed Augustine to Rome, where she learned he had left for Milan. She continued her persual and eventually came upon St. Ambrose, who helped her convert Augustine to Christianity following his seventeen-year resistance.

Augustine later wrote a book called Confessions, in which he wrote of Monica’s habit of bringing “to certain oratories, erected in the memory of the saints, offerings of porridge, bread, water and wine.”

When Monica moved to Milan, a bishop named Ambrose told her wine “might be an occasion of gluttony for those who were already given to drink,” so she stopped preparing wine as offerings for the saints.

Augustine wrote: “In place of a basket filled with fruits of the earth, she had learned to bring to the oratories of the martyrs a heart full of purer petitions, and to give all that she could to the poor – so that the communion of the Lord’s body might be rightly celebrated in those places where, after the example of his passion, the martyrs had been sacrificed and crowned.”

After a period of six months, Augustine was baptized in the church of St. John the Baptist at Milan. The pair were led to believe they should spread the Word of God to Africa, but it the Roman city of Civitavecchia, Monica passed away.

Augustine recorded the words she imparted upon him when she realized death was near. “Son, nothing in this world now affords me delight. I do not know what there is now left for me to do or why I am still here, all my hopes in this world being now fulfilled.”

She was buried at Ostia, and her body was removed during the 6th century to a hidden crypt in the church of Santa Aurea in Osta, near the tomb of St. Aurea of Ostia.

In 1430, Pope Martin V ordered her relics to be brought to Rome and many miracles were reported to have occurred along the way. Later, Cardinal d’Estouteville built a church to honor St. Augustine called the Basilica di Sant’Agostino, where her relics were placed in a chapel to the left of the high altar.

Her funeral epitaph survived in ancient manuscripts and the stone it was originally written on was discovered in the church of Santa Aurea in 1945.

“Here the most virtuous mother of a young man set her ashes, a second light to your merits, Augustine.

As a priest, serving the heavenly laws of peace, you taught [or you teach] the people entrusted to you with your character. A glory greater than the praise of your accomplishments crowns you both – Mother of the Virtues, more fortunate because of her offspring.”

Fun Fact
The city of Santa Monica, California is named after Monica, as were the “weeping” springs outside the city.

St. Monica,
I need your prayers.
You know exactly how I’m feeling because you once felt it yourself.
I’m hurting, hopeless, and in despair.
I desperately want my child to return to Christ in his Church but I can’t do it alone.
I need God’s help.
Please join me in begging the Lord’s powerful grace to flow into my child’s life.
Ask the Lord Jesus to soften his heart, prepare a path for his conversion, and activate the Holy Spirit in his life.
Amen.