One who Lives in the Divine Will pronounces his Fiat in every act he does and forms many Divine Lives.

Feast of Day of the North American Martyrs – October 19 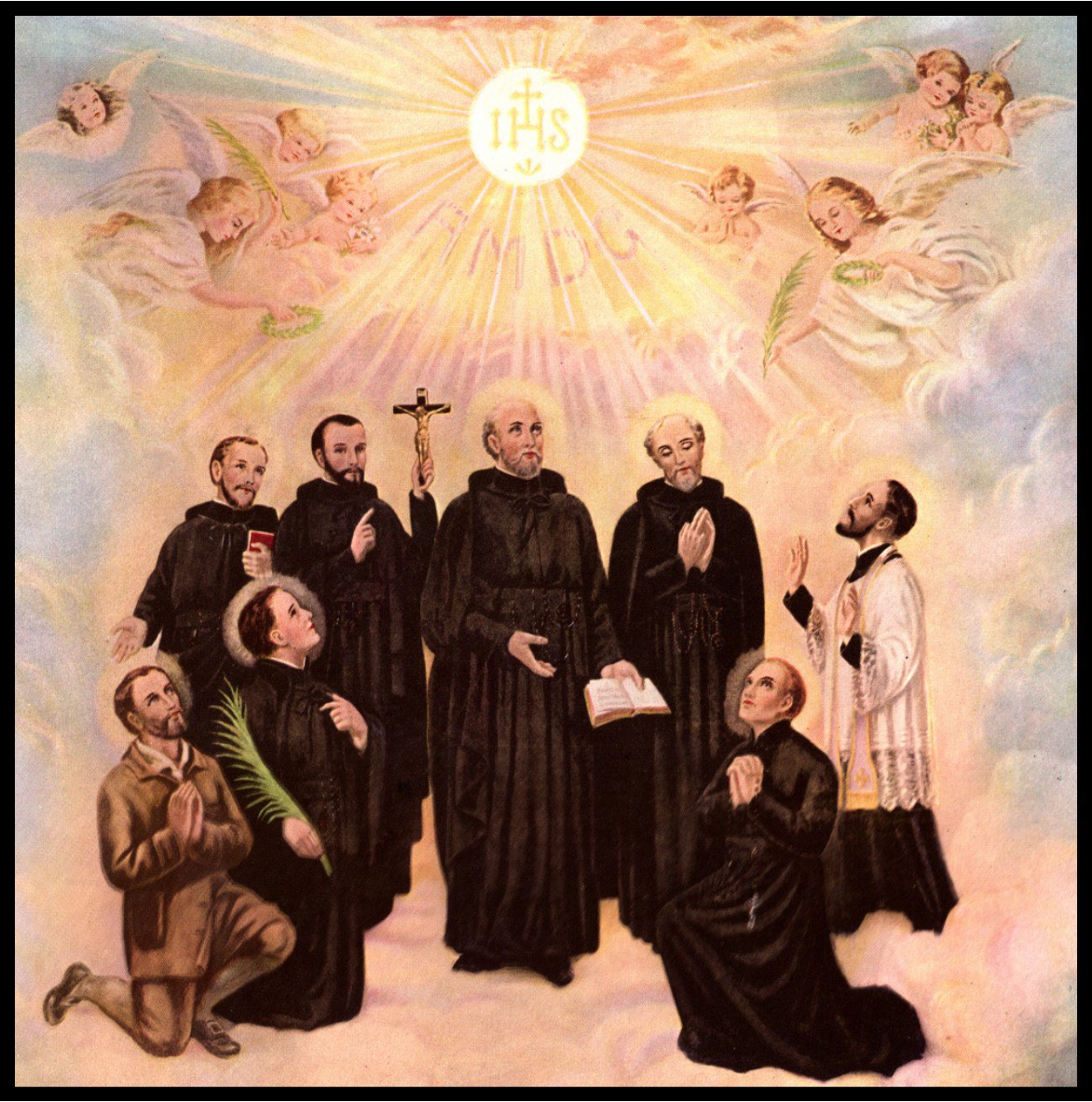 The Canadian Martyrs, also known as the North American Martyrs, were eight Jesuit missionaries from Sainte-Marie among the Hurons. They were ritually tortured and killed on various dates in the mid-17th century in Canada, in what is now southern Ontario, and in upstate New York, during the warfare between the Iroquois (particularly the Mohawk people) and the Huron. They have subsequently been canonized and venerated as martyrs by the Catholic Church.

Jesuit missionaries worked among the Huron (Wendat), an Iroquoian-speaking people who occupied territory in the Georgian Bay area of Central Ontario. (They were not part of the Iroquois Confederacy, initially made up of five tribes south and east of the Great Lakes.) The area of their traditional territory is called Huronia. The Huron in this area were farmers, fishermen and traders who lived in villages surrounded by defensive wooden palisades for protection.[7] Sainte-Marie among the Hurons was the headquarters for the French Jesuit Mission to the Huron Wendat people.[8]

By the late 1640s the Jesuits believed they were making progress in their mission to the Huron, and claimed to have made many converts. But, the priests were not universally trusted. Many Huron considered them to be malevolent shamans who brought death and disease wherever they travelled; after European contact, the Huron had suffered high fatalities in epidemics after 1634 of smallpox and other Eurasian infectious diseases, to which aboriginal peoples had no immunity. (Epidemiological studies have shown the diseases were likely carried by the increased number of children immigrating after 1634 with families from cities in nations where smallpox was endemic, such as France, England and the Netherlands).

In 1642, the Mohawk captured René Goupil,[1] and Father Isaac Jogues,[2] bringing them back to their village of Ossernenon south of the Mohawk River. They ritually tortured both men and killed Goupil. After several months of captivity, Jogues was ransomed by Dutch traders and the minister Johannes Megapolensis from New Netherland (later Albany). He returned for a time to France, but then sailed back to Quebec. In 1646 he and Jean de Lalande were killed during a visit to Ossernenon intended to achieve peace between the French and the Mohawk.[3]

The martyrs were canonized by Pope Pius XI in 1930.[10] They are collectively the secondary patron saints of Canada. St. René Goupil, St. Isaac Jogues, and St. Jean de Lalande are the first three U.S. saints, martyred at Ossernenon, 9 miles west of the confluence of the Schoharie and Mohawk rivers. Their feast day is celebrated in the General Roman Calendar and in the United States on October 19 under the title of “John de Brébeuf and Isaac Jogues, Priests, and Companions, Martyrs,” and in Canada on September 26.

Permanent link to this article: https://bookofheaven.org/2017/10/19/feast-of-day-of-the-north-american-martyrs-october-19/