Luisa Shall do the Third Fiat

Divine Will Acts in Three Distinct Persons on Earth

Mother of the Word Incarnate 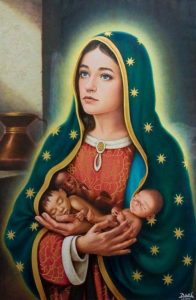 I spent this morning very anguished because of the many offenses which I saw Him receive from men, especially because of certain horrendous dishonesties. How much the loss of souls grieved Jesus! More so, since it was a newborn baby that they were going to kill, without administering holy baptism to him. It seems to me that this sin weighs so much on the scale of Divine Justice, that it is the one that most cries out for revenge before God. Yet, these sorrowful scenes are renewed so very often. My most sweet Jesus was so afflicted as to arouse pity. Seeing Him in such a state, I did not dare to tell Him anything, and Jesus just told me: “My daughter, unite your sufferings to Mine, your prayers to Mine, so that they may be more acceptable before the majesty of God, and may appear not as your things, but as my own works.” Then He continued to make Himself seen other times, but always in silence. May the Lord be always blessed.

Permanent link to this article: https://bookofheaven.org/2019/01/23/mother-of-the-word-incarnate/