In the spring and summer of 1916, nine-year-old Lúcia dos Santos and her cousins Francisco and Jacinta Marto were herding sheep at the Cova da Iria near their home village of Aljustrel in the parish of Fátima, Portugal. They later said they were visited three times by an apparition of an angel. They said the angel, who identified himself as the “Angel of Peace” and “Guardian Angel of Portugal“, taught them prayers, to make sacrifices, and to spend time in adoration of the Lord.[4]

Beginning in the spring of 1917, the children reported apparitions of an Angel, and starting in May 1917, apparitions of the Virgin Mary, whom the children described as “the Lady more brilliant than the Sun”. The children reported a prophecy that prayer would lead to an end to the Great War, and that on 13 October that year the Lady would reveal her identity and perform a miracle “so that all may believe.”[5] Newspapers reported the prophecies, and many pilgrims began visiting the area. The children’s accounts were deeply controversial, drawing intense criticism from both local secular and religious authorities. A provincial administrator briefly took the children into custody, believing the prophecies were politically motivated in opposition to the officially secular First Portuguese Republic established in 1910.[6] The events of 13 October became known as the Miracle of the Sun. 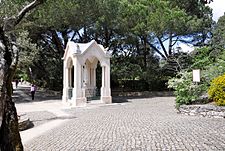 Statue dedicated to the apparition.

On 13 May 1917, the children reported seeing a woman “brighter than the sun, shedding rays of light clearer and stronger than a crystal goblet filled with the most sparkling water and pierced by the burning rays of the sun.”[7] The woman wore a white mantle edged with gold and held a rosary in her hand. She asked them to devote themselves to the Holy Trinity and to pray “the Rosary every day, to bring peace to the world and an end to the war”.[7] While the children had never told anyone about seeing the angel, Jacinta told her family about seeing the brightly lit woman. Lúcia had earlier said that the three should keep this experience private. Jacinta’s disbelieving mother told neighbors about it as a joke, and within a day the whole village knew of the children’s vision.[8] 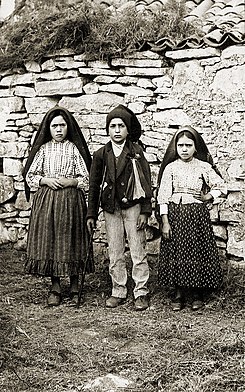 The children said the woman told them to return to the Cova da Iria on 13 June 1917. Lúcia’s mother sought counsel from the parish priest, Father Ferreira, who suggested she allow them to go. He asked to have Lúcia brought to him afterward so that he could question her. The second appearance occurred on 13 June, the feast of Saint Anthony, patron of the local parish church. On this occasion the lady revealed that Francisco and Jacinta would be taken to Heaven soon, but Lúcia would live longer in order to spread her message and devotion to the Immaculate Heart of Mary.[7][9]

During the June visit, the children said the lady told them to say the Holy Rosary daily in honor of Our Lady of the Rosary to obtain peace and the end of the Great War. (Three weeks earlier, on 21 April, the first contingent of Portuguese soldiers had embarked for the front lines of the war.) The lady also purportedly revealed to the children a vision of hell, and entrusted a secret to them, described as “good for some and bad for others”.[9] Fr. Ferreira later stated that Lúcia recounted that the lady told her, “I want you to come back on the thirteenth and to learn to read in order to understand what I want of you. …I don’t want more.”[10] 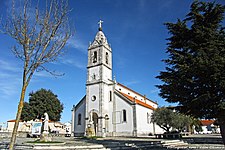 The Parish Church of Fátima where the three children who saw the apparition were baptized.

In the following months, thousands of people flocked to Fátima and nearby Aljustrel, drawn by reports of visions and miracles. On 13 August 1917, the provincial administrator Artur Santos[11] (no relation to Lúcia dos Santos) intervened, as he believed that these events were politically disruptive in the conservative country. He took the children into custody, jailing them before they could reach the Cova da Iria. Santos interrogated and threatened the children to get them to divulge the contents of the secrets. Lúcia’s mother hoped the officials could persuade the children to end the affair and admit that they had lied.[9] Lúcia told Santos everything short of the secrets, and offered to ask the woman for permission to tell the official the secrets.[12]

That month, instead of the usual apparition in the Cova da Iria on 13 August, the children reported that they saw the Virgin Mary on 19 August, a Sunday, at nearby Valinhos. She asked them again to pray the rosary daily, spoke about the miracle coming in October, and asked them “to pray a lot, a lot for the sinners and sacrifice a lot, as many souls perish in hell because nobody is praying or making sacrifices for them.”[8]

The three children claimed to have seen the Blessed Virgin Mary in a total of six apparitions between 13 May and 13 October 1917. Lúcia also reported a seventh Marian apparition at Cova da Iria. 2017 marked the 100th anniversary of the apparitions.[13]

Miracle of the Sun

Main article: Miracle of the Sun 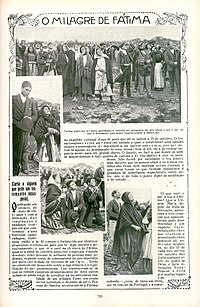 Page from Ilustração Portuguesa, 29 October 1917, showing the people looking at the Sun during the Fátima apparitions attributed to the Virgin Mary

After some newspapers reported that the Virgin Mary had promised a miracle for the last of her apparitions on 13 October, a huge crowd, possibly between 30,000 and 100,000,[14][15] including reporters and photographers, gathered at Cova da Iria. What happened then became known as the “Miracle of the Sun”.

Various claims have been made as to what actually happened during the event. The three children who originally claimed to have seen Our Lady of Fátima reported seeing a panorama of visions during the event, including those of Jesus, Our Lady of Sorrows, Our Lady of Mount Carmel, and of Saint Joseph blessing the people.[16] Father John De Marchi, an Italian Catholic priest and researcher wrote several books on the subject, which included descriptions by witnesses who believed they had seen a miracle created by Mary, Mother of God.[12] According to accounts, after a period of rain, the dark clouds broke and the Sun appeared as an opaque, spinning disc in the sky. It was said to be significantly duller than normal, and to cast multicolored lights across the landscape, the people, and the surrounding clouds. The Sun was then reported to have careened towards the Earth before zig-zagging back to its normal position.[9] Witnesses reported that their previously wet clothes became “suddenly and completely dry, as well as the wet and muddy ground that had been previously soaked because of the rain that had been falling”.[17]

Not all witnesses reported seeing the Sun “dance”. Some people only saw the radiant colors, and others, including some believers, saw nothing at all.[18][19][20][21] The only known picture of the Sun taken during the event does not show anything unusual.[22] No unusual phenomenon of the Sun was observed by scientists at the time.[8] A number of theologians, scientists, and skeptics have offered alternative explanations that include psychological suggestibility of the witnesses, temporary retinal distortion caused by staring at the intense light of the Sun, and optical effects caused by natural meteorological phenomena.[23]

Later years of the children 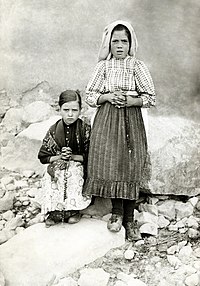 Francisco and Jacinta Marto died in the international flu pandemic that began in 1918 and swept the world. Francisco Marto died at home on 4 April 1919, at the age of ten. Jacinta died at the age of nine in Queen Stephanie’s Children’s Hospital in Lisbon on 20 February 1920. They are buried at the Sanctuary of Fátima. They were beatified by Pope John Paul II on 13 May 2000 and canonized by Pope Francis on 13 May 2017.[24] Their mother Olímpia Marto said that her children predicted their deaths many times to her and to curious pilgrims in the brief period of time after the Marian apparitions.[25]

At the age of fourteen, Lúcia was sent to the school of the Sisters of St. Dorothy (Dorothean) in Vilar, a suburb of Porto, Portugal. In 1928 she became a postulant at the convent of the Sisters of St. Dorothy in Tui, Spain, near the border with Portugal. Lúcia continued to report private visions periodically throughout her life. She reported seeing the Virgin Mary again in 1925 in the convent. This time she said she was asked to convey the message of the First Saturdays Devotion. She said that a subsequent vision of Christ as a child reiterated this request. In 1929, Lúcia reported that Mary returned and repeated her request for the Consecration of Russia to her Immaculate Heart. She also reported an apparition in Rianxo, Galicia, in 1931, in which she said that Jesus visited her, taught her two prayers, and delivered a message to give to the church’s hierarchy.

In 1936 and again in 1941, Sister Lúcia said that the Virgin Mary had predicted the deaths of her two friends during the second apparition on 13 June 1917. According to Lúcia’s 1941 account, on 13 June, Lúcia asked the Virgin if the three children would go to heaven when they died. She said that she heard Mary reply, “Yes, I shall take Francisco and Jacinta soon, but you will remain a little longer, since Jesus wishes you to make me known and loved on Earth. He wishes also for you to establish devotion in the world to my Immaculate Heart.”[26]

In 1947, Sister Lúcia left the Dorothean order. She joined the Discalced Carmelite Order in a monastery in Coimbra, Portugal. Lúcia died on 13 February 2005, at the age of 97.