Jesus speaks with bitterness about the abuses of the Sacraments.

This morning lovable Jesus continued to make Himself seen in silence, but with a most afflicted appearance; He had a thick crown of thorns driven onto His head. I felt my interior powers silent and I did not dare to say a single word; but in seeing that He suffered very much in His head, I stretched out my hands and, very carefully, removed the crown of thorns. But, what a bitter spasm He suffered! How His wounds opened more and His blood poured out in torrents! In truth, it was something that tortured the soul. After I removed it, I placed it on my head, and He Himself helped so that it might penetrate inside; however, everything was silence on both parts.

But, what was my surprise when, after a little while, I went about looking at Him again, and I saw that with their offenses creatures were putting another crown on the head of Jesus! Oh, human perfidy! Oh, incomparable patience of Jesus, how great you are! And Jesus kept silent, and almost did not look at them so as not to know who His offenders were. Again I removed it, and as all my interior powers woke up with tender compassion, I said to Him: ‘My dear Good, my sweet Life, tell me a little bit – why do You no longer tell me anything? You have never been used to hiding your secrets from me. O please! Let us speak together a little, for in this way we will pour out a little bit the sorrow and the love that oppress us.’

And He: “My daughter, you are the relief for my pains. However, know that I do not tell you anything because you always force Me not to chastise the people. You want to oppose my Justice, and if I do not do as you want, you remain disappointed, and I feel more pain for not keeping you content. Therefore, in order to avoid displeasures on both our parts, I keep silent.” And I: ‘My good Jesus, have You perhaps forgotten that You Yourself suffer after You have made use of your Justice? It is seeing You suffer in the creatures themselves that makes me more than ever alert in forcing You not to chastise the people. And then, seeing the creatures themselves turning against You like many poisonous vipers, such that they would almost take your life if it were in their power, because they see themselves under your scourges, and they irritate your Justice even more… I don’t have the heart to say Fiat Voluntas Tua.’

And He: “My Justice can take no more. I feel wounded by everyone – by priests, by devout people, by the secular, especially because of the abuse of the Sacraments. Some do not care about them at all, adding despises; others, who attend them, turn them into a conversation for their own pleasure; and others, not satisfied in their whims, because of this reach the point of offending Me. Oh, how tortured my Heart is in seeing the Sacraments reduced to painted pictures, or like those statues of stone which seem to be alive and operating from afar, but as one draws near them, one begins to discover the deceit. Then, one goes about touching them, and what does he find? Paper, stone, wood – inanimate objects; and here is how they are disillusioned completely. This is how the Sacraments have been reduced for the most part – there is nothing but mere appearance. What to say, then, about those who remain more filthy than clean? And then, the spirit of interest that reigns among the religious – it is something to be wept over! Don’t you think that they are all eyes where there is a most wretched penny, to the point of degrading their dignity? But where there is no interest they have no hands nor feet to move a tiny bit. This spirit of interest fills their interior so much that it overflows outside, to the point that the secular themselves feel the stench of it, are scandalized by it, and this causes them to give no credence to their words. Ah, yes, no one spares Me! There are some who offend Me directly, and some who, though they could prevent so much evil, do not bother doing it; so, I do not know to whom to turn. But I will chastise them in such a way as to render them incapable, and some I will destroy completely. They will reach such a point that churches will remain deserted, with no one to administer the Sacraments.”

Interrupting Him, all frightened I said: ‘Lord, what are You saying?! If there are some who abuse the Sacraments, there are also many good daughters who receive them with the due dispositions, and who would suffer very much if they could not attend them.’ And He: “Too scarce is their number; and then, their pain for not being able to receive them will work as reparation for Me, and to make them victims for those who abuse them.” Who can say how tormented I was left by these words of blessed Jesus? But I hope that He will placate Himself out of His infinite Mercy. 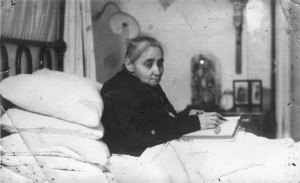 Having received Communion I felt all transformed in blessed Jesus, and I said to myself: ‘How can one maintain this transformation with Jesus?’ And in my interior it seemed that Jesus was saying: “My daughter, if you want to be always transformed in Me – even more, to be one single thing with Me – love Me always and you will maintain your transformation with Me. In fact, love is fire, and whatever woods are thrown into the fire, small or big, green or dry, they all take the form of fire and convert into fire itself; and after these woods have been burned, one can no longer discern which wood was one and which another, neither the green one nor the dry one – one can see nothing but fire. The same when the soul never ceases to love Me. Love is fire that transmutes the soul in God; love unites, its flames invest all of the human operations and give them the form of the divine operations.”

Permanent link to this article: https://bookofheaven.org/2013/10/01/october-1st-readings/