Luisa, the Spark of Jesus

Effects of the Imprisonment of Jesus in the Passion.

This year, the Feast of the Immaculate Conception will be celebrated on December 9th

This year, the Feast of the Immaculate Conception will be celebrated on December 9th since December 8th is on the Second Sunday of Advent. 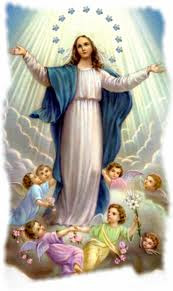 Our Blessed Mother asked for an Hour of Grace on her Feast of the Immaculate Conception.  Our Lady in these apparitions appealed especially to the consecrated souls of clergy and religious, promising to protect them and deepen their vocations if they but honor Her in this devotion as Rosa Mystica.  Consecrated souls today have been under great attack and they need our prayers.

In Montichiari, Italy where Our Lady Rosa Mystica appeared, said that she would convert hearts that are as hardened as marble floors.  The dream of Our Mother is to bring ALL of Her children to Her Son.  She has asked us to pray not only for our personal petitions during the Hour of Grace but also for her intentions of Her Immaculate Heart as well.  Many statues of Rosa Mystica around the world have wept tears and tears of blood because of the sad condition of the world in these end times.

May no souls be lost as we pray with our Blessed Mother’s intercession! 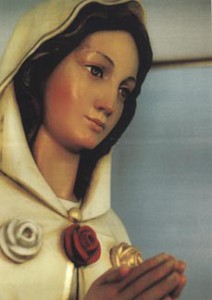 Maria Rosa Mystica, pray for us!

REQUEST OF BLESSED MOTHER FOR THE HOUR OF GRACE

1. Day and time of Hour of Grace – December 8th (This year it’s December 9th!) Feast of the Immaculate Conception – to be started at 12 noon and will continue until 1 PM (one full hour of prayer)

2. During this hour the person making the ‘Hour of Grace’ either at home or in the Church must put away all distractions (do not answer the telephone or answer any doors or do anything but totally concentrate on your union with God during this Special Hour of Grace)

3. Begin the Hour of Grace by praying three times the 51st Psalm with arms outstretched.

4. The rest of the Hour of Grace may be spent in silent communication with God meditating upon the Passion of Jesus saying the Holy Rosary, praising God in your own way or by using favorite prayers, singing hymns, meditating upon other Psalms, etc.

The Blessed Mother has requested that Her message be sent throughout the entire world.

Remember to pray for our country during this hour.

Please help the Blessed Virgin Mary to fulfill Her Mission well … that all souls be drawn to God and that Jesus will be loved in every heart.

This is the perpetual song of her Heart.

Let it also be ours.

Please distribute this message to as many people as you can.

Acknowledgment: A Very special Thank you to the Felician Sisters in general who printed this story in their “AVE MARIA” magazine and who so graciously translated this story from Polish into English in order to comply with the request of the Blessed Virgin Mary that this message be sent throughout the world.

During the period of November 24, 1946 to December 8, 1947, the Blessed Mother appeared to Sister Pierrina in a little church in Montichiari, Italy, eleven times.

On the first appearance the Blessed Mother told Sister Pierrina that She wanted to be known as the ‘Mystical Rose’ and that an hour of grace should be kept at noon, December 8th in all the Catholic Churches of the world. The Blessed Mother wanted this to be known through all of Italy and the entire world. 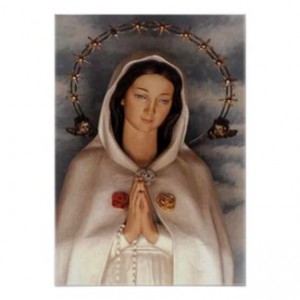 It was November 16, 1947 when Sister Pierrina was finishing her thanksgiving after Holy Communion when she saw a great light. She then saw a vision of the Blessed Mother as the ‘Mystical Rose’.

Sister was so deeply moved by the stunning beauty of Our Lady that she began talking to Her. All of a sudden a gentle force made her kneel down in front of Our Lady. The Blessed Mother spoke these words. “My Son is greatly offended by the sins of impurity. He is already planning to end the deluge upon the people, for their destruction, but I have asked him to show mercy and not send the destruction. So that is why I have appeared to ask for penance and atonement for the sins of impurity.”

Then the Blessed Mother asked for an Act of Humility by Sister Pierrina. She asked her to make the sign of the cross with her tongue on each of the stones in the Sanctuary. “This shall be a reminder to the people that I have appeared here and do not have the people step on those stones.”

The Blessed Mother then stepped on each of the stones so that Her gown touched all four stones.

On the 22nd of November, Sister Pierrina felt the overwhelming urge to go to Church at 4:00. The Mother Superior, four Sisters and a group of friends accompanied her. They were all saying the Rosary when the Blessed Mother appeared as before.

She instructed Sister Pierrina to make the sign of the cross on the stones and fence them off so that no one would step on them.

Again Our Lady asked for penance. She said, “Penance is nothing more than accepting all our crosses daily willingly. No matter how small, accept them with love. “At this time, she told sister Pierrina to come again on December 8th at noon.” This will be My Hour of Grace.” The Sister asked how she was to prepare for this Hour of Grace. To which the Blessed Mother said, “With Prayers and Penance. Pray the 51st Psalm with outstretched arms three times. During the Hour of Grace, many spiritual graces would be granted. The most hard-hearted sinners will be touched by the grace of God.”

The Blessed Virgin promised that whatever a person asked Her for during this Hour of Grace (even in impossible cases) would be granted to them, if it was in accordance with the will of the Eternal Father.

It was December 7th when Sister Pierrina felt the urge to go to Church. This time she was accompanied by the Priest and the Mother Superior.

The Blessed Mother appeared with a young boy and girl dressed in beautiful white clothing. Sister Pierrina was sure these little ones were angels because they were so beautiful.

The Blessed Mother said, “Tomorrow I will show you My Immaculate Heart which is so little known among the people.” She asked people to pray for Russia.” There are so many people being held prisoners which their families know nothing of because they have been gone for so many years. Pray for the conversion of Russia, the suffering of the soldiers and their sacrifices and martyrdom will bring peace to Italy.

The little children are Francisco and Jacinta. I am giving them to you as your companions. You will have much to suffer for My sake. I want simplicity and goodness from you as of these little children.” The Blessed Mother then blessed Sister Pierrina, the Priest and all those who were gathered there.

On the morning of December 8th people began arriving at the little Church at 8:00 in the morning from neighboring towns. By noon, some 10,000 people had gathered to see the Blessed Mother, many of whom had to stand outside because the Church did not have enough room for the large crowd.

Sister Pierrina was accompanied to Church by her Mother and Brothers, the Mother Superior and the Chief of Police from Montichiari. Sister was reciting the Rosary with the crowd in the middle of the Church. Suddenly a brilliant white light appeared from the ceiling. Stairs were coming from the light down to the floor of the Church about fifteen feet in length.

In the most gentle and loving voice, Our Lady smiled and began to speak. “I am the Immaculate Conception, the Mother of all graces and the Mother of my Beloved Son, Jesus. I want to be known as the Mystical Rose. My wish is that every year on the 8th of December at noon an ‘Hour of Grace’ will be installed. Many spiritual graces and physical blessings will be received by those who pray undisturbed during this hour.” Then slowly she began to ascend the staircase gracefully scattering roses as She went along until She reached midway of the staircase. Here again the Blessed Mother spoke, “I am very happy to see this great demonstration of Faith.”

Sister Pierrina asked for many of the sinners to be forgiven. The Blessed Mother replied. “My Divine Son will show his Greatest Mercy as much as the people will pray for them. I want this to be known and told to Pope Pius XII. Tell him I want him to install the ‘Hour of Grace’ throughout the whole world and even for those who are not able to go to Church during this time, can obtain this grace in their homes at noon time.”

She also asked that a Statue be made and placed on the spot where she stood. This should be called the ‘Rosa Mystica’ and carried in procession through the town at which time many graces will be given and cures will take place. Then the Statue is to be returned to the Church.

Our Lady prayed for the sick, some will be cured others not. Many men, women and children were cured at that very instant.

A twenty-six year old woman who could not say a word for nine months, suddenly began shouting, “I see Her. I see the Blessed Virgin.” An eighteen year old girl with ulcers was instantly cured. A five year old boy who had been paralyzed was told by the Blessed Mother, “Come to Me, you will be walking now.” He was placed on the Blessed Stones and was able to walk.

There were three others who were very sick and were immediately cured. But of course, the greatest miracles taking place were those of the spiritual blessings being shed upon the people gathered in the Church.

The Blessed Mother said, “This is the last time I will appear here. Pray, weep and do penance on these Stones and you will receive the care of My Motherly Heart.” She then left the little Church, but because of the Unending Love of Our Heavenly Mother, She has given us the ‘Hour of Grace’ to be spread through the entire world. She had given all the opportunity to demonstrate our love and trust to Her and to help make reparation for the grievous sins offending Her Beloved Son, Our Lord Jesus Christ.

Permanent link to this article: https://bookofheaven.org/2013/12/03/this-year-the-feast-of-the-immaculate-conception-will-be-celebrated-on-december-9th/