First Word that Adam Pronounced. God’s First Lesson to Adam. The Divine Will Operating in Man.

Feast of Our Lady of Guadalupe 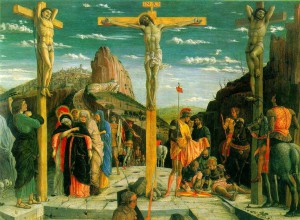 Lament of Jesus in His Passion, in seeing His garments being divided, and lots drawn for His tunic.  How Adam, before sinning, was clothed with Light, and as he sinned, he felt the need to cover himself.

I was doing my usual acts in the Supreme Fiat, and my adored Jesus came out from within my interior and told me:  “My daughter (Luisa), in My Passion there is a lament of Mine that came out with immense sorrow from the depth of My tormented Heart:  ‘They divided My garments and drew lots for My tunic.’  How painful it was for Me to see My garments being divided among My very executioners, and My tunic being gambled away.  It was the only object I possessed, given to Me, with so much Love, by My sorrowful Mama; and now, they not only stripped Me of it, but they made of it a game.

“But do you know who pierced Me the most?  In those garments, Adam became present to Me, clothed with the Garment of innocence and covered with the indivisible Tunic of My Supreme Will.  In creating him, the uncreated Wisdom acted as more than a most loving mother; more than with a tunic, It clothed him with the unending Light of My Will—a Garment that is not subject to being either disarranged, or divided, or consumed; a Garment that was to serve man in order to preserve the Image of his Creator and the Gifts received from Him, and that was to render him Admirable and Holy in all his things.  Not only this, but It covered him with the Overgarment of Innocence.  And Adam, in Eden, with his passions divided the Garments of Innocence, and he gambled away the Tunic of My Divine Will—a Garment that is incomparable and of Radiant Light.

“What Adam did in Eden was repeated under My Eyes on Mount Calvary.  In seeing My garments being divided and My tunic gambled away—symbol of the Royal Garment given to man, My sorrow was so intense that I made of it a lament.  It became present to Me when creatures, in doing their own will, make a game of Mine, and the so many times in which they divide the Garment of Innocence with their passions.  All Goods are enclosed in man by Virtue of this Royal Garment of the Divine Will; once this is gambled away, he remains uncovered, he loses all Goods, because he lacks the Garment that kept them enclosed within himself.  So, among the many evils that creatures do by doing their own will, they add the irreparable evil of gambling away the Royal Garment of My Divine Will—a Garment that cannot be substituted with any other garment.”

After this, my sweet Jesus showed me Himself placing my little soul inside a Sun, and with His Holy Hands He held me still within that Light, which was such that, as it covered me completely, inside and out, I could not see, nor was I able to see anything but Light.

And my Adored Good added:  “My daughter (Luisa), in creating man, the Divinity placed him inside the Sun of the Divine Will, and all creatures in him.  This Sun served as Garment not only for his soul, but Its Rays were such as to cover also his body, in such a way as to serve as more than a Garment for him, rendering him so Adorned and Beautiful that neither kings nor emperors have ever appeared so adorned as Adam appeared, with this Garment of most Refulgent Light.

“Those who say that, before sinning, Adam went naked are wrong.  False, false.  If all things created by Us are all adorned and clothed, he who was Our jewel, the Purpose for which all things were created—was he not to have the most beautiful Garment and the most beautiful Ornament of all?  So, to him befitted the beautiful Garment of the Light of the Sun of Our Will; and since he possessed this Garment of Light, he had no need of material garments in order to cover himself.  As he withdrew from the Divine Fiat, so did Light withdraw from his soul and from his body; he lost his beautiful Garment, and in seeing himself no longer surrounded with Light, he felt naked.  Feeling ashamed in seeing that he was the only one to be naked in the midst of all created things, he felt the need to cover himself, and he made use of superfluous things, created things, to cover his nakedness.

“This is so true, that after My highest sorrow of seeing My garments divided and My tunic gambled away, as My Humanity rose again I took no other garments, but I clothed Myself with the most Refulgent Garment of the Sun of My Supreme Will.  That was the same Garment as the one that Adam possessed when he was created, because in order to open Heaven, My Humanity was to wear the Garment of the Light of the Sun of My Supreme Will—a Royal Garment; and as it gave Me the insignia of King and Dominion into My Hands, I opened Heaven to all the redeemed ones; and presenting Myself before My Celestial Father, I offered Him the Garments of His Divine Will, whole and beautiful, with which My Humanity was covered, so as to make Him recognize all the redeemed ones as Our children.

“So, while It is Life, at the same time My Divine Will is the True Garment of the creation of the creature, and therefore It holds all Rights over her.  But how much do they not do to escape from within this Light?  Therefore, be still in this Sun of the Eternal Fiat, and I (Jesus) will help you (Luisa) to maintain yourself in this Light.”

On hearing this, I said to Him:  “My Jesus and My All, how is this?  If Adam in the state of innocence had no need of garments because the Light of Your Will was more than garment, the Sovereign Queen, however, possessed Your Will as whole, and You Yourself were Your Will Itself; yet, neither the Celestial Mama nor Yourself wore the Garments of Light, and both of You made use of material garments to cover Yourselves.  How is this?”

And Jesus continued, saying:  “My daughter (Luisa), both My Mama and I came to set fraternal bonds with creatures; We came to raise decayed humanity, and therefore to take up the miseries and humiliations into which it had fallen, in order to expiate for them at the cost of Our Lives.  Had they seen Us clothed with Light, who would have dared to approach Us and to deal with Us?  And in the course of My Passion, who would have dared to touch Me?  The Light of the Sun of My Will would have blinded them and crushed them to the ground.

“Therefore, I had to make a greater miracle, hiding this Light within the Veil of My Humanity, and appearing as one of them, because It represented, not Adam innocent, but Adam fallen, and so I was to subject Myself to all of his evils, taking them upon Myself as if they were My own, in order to expiate for them before Divine Justice.  But when I rose again from death, representing Adam innocent, the New Adam, I ceased the miracle of keeping the Garments of the Refulgent Sun of My Divine Will hidden within the Veil of My Humanity, and I remained clothed with most pure Light; and with this Royal and Dazzling Garment I made My entrance into My Fatherland, leaving the doors open that had remained closed up to that point, so as to let all of those who had followed Me enter.

Permanent link to this article: https://bookofheaven.org/2013/12/11/laments-of-jesus-seeing-his-garments-divided-adam-before-sinning-was-clothed-with-garment-of-light/