How, in the Creation, the Divinity bilocated Its Will 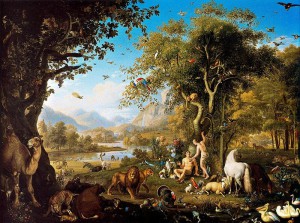 How, in the Creation, the Divinity bilocated Its Will.  The Nature of the Divine Will is Happiness.  How It constituted Itself act of everything.  The possession It wants to give to the creature.

I continue in my state of abandonment in the Supreme Volition, and while I was going around with my mind in the whole Creation, to follow It in all created things and make my will one with Its Own, so as to form one single act with Its Own, my always lovable Jesus, making me pause, told me:  “My daughter (Luisa), in issuing the Creation, the Divinity bilocated Its Will, and one remained within Us, for Our Regime, Joy, Happiness, Contentments and innumerable and infinite Beatitudes that We possess; because Our Will has the First Place in all Our Acts.

“The other bilocated Will of Ours came out from Us into Creation, to give Us, also externally, Divine Honors and Glory, and innumerable Happinesses and Joys.  In fact, Our Will possesses Joys, Happinesses and Beatitudes as Its Own Qualities—this is Its Nature; and if It did not release from Itself these innumerable Beatitudes and Contentments that It possesses, it would be for It something against Its Own Nature.

“Now, the Supreme Majesty, by issuing Our bilocated Will into the whole Creation so that It might be constituted Life and Act of each created thing, issued from Itself innumerable Riches, countless Beatitudes and Joys, that only the Power of the Eternal Fiat could preserve, maintaining their regime, so that they would never lose their integrity and beauty.  Now, while all these Properties issued by Us glorified Us, giving Us the Glory of as many continuous and Divine Acts for as many created things as came out to light, they were established as properties of creatures, who, unifying their wills with Ours, were to have their act in each Act of Our Will, in such a way that, just as We were to have the Divine Act of Our Will in each created thing, We were to have the act of the creature, transfused, as if they were one alone.

“With this, she would come to know Its Riches; by Knowing them, she would Love them, and she would acquire the Right to possess them.  How many Divine Acts does My Supreme Will not do in each created thing, and the creature has not even the most remote Knowledge of these Acts?  And if she does not know them, how can she Love them and possess them, if they are unknOwn to her?  So, all the Riches, the Happinesses, the Divine Acts present in the whole Creation are inactive and lifeless for creatures; and if they receive anything at all, it is not as Property, but as the Effect of the Supreme Goodness that always gives of Its Own.  It gives, as alms, also to those who have no right of possession; others, then, take them as usurpations.

“In fact, in order to Possess these Goods that the Celestial Father put out in the Creation, the creature must make her way; she must elevate herself to Union with that Divine Will, in order to work together with It, do the same Acts, Know them in order to do them, so as to be able to say:  ‘What It does, I do.’  With this, she acquires the Right of Possession in all the Acts of this Supreme Will; and when two wills form one single will, ‘Mine’ and ‘yours’ no longer exist; rather, by Right, what is Mine is yours, and what is yours is Mine.

“And so, this is the reason why My Supreme Will calls you (Luisa)—awaits you in each created thing, to make KnOwn to you the Riches that are in It, to make you (Luisa) repeat Its Divine Acts together with It, and to give you the Right of Possession.  You (Luisa) yourself become Its Own Property; you remain dissolved within Its immense Riches and within Its very Acts, and—oh! how the Divine Fiat enjoys making you (Luisa) the Owner of Its immense Riches.  Its Desire of constituting Its heiresses is so great, that It feels twice as Happy when It sees (Luisa) one who Knows Its Possessions and makes Its Divine Act her Own; so much so, that even though It saw that man, by withdrawing from Its Will, lost his way to reach the possession of Its Dominions, It did not stop, but in the Excess of Its Love and of Its long sorrow of seeing Its Riches inactive for the Good of creatures, as soon as the Eternal Word clothed Himself with human flesh, It constituted Itself Life of each of His Acts, so as to form more Goods for them, powerful Aids and effective Remedies, more within the reach of decayed humanity, so as to realize the Purpose of making them possess what was issued in Creation.

“There is nothing that comes from Us, that does not have this Purpose—that the creature and everything return into Our Will.  If it were not so, We would render Ourselves extraneous to Our Own Works.  So, Creation, Redemption, My daughter (Lusia), have the Primary Purpose that everything be Our Will, in Heaven and on earth; therefore, It flows everywhere, It is present in every place, to make everything Its Own, and to give everything that belongs to It.  Therefore, be attentive in following Our Works; satisfy this Desire, so insistent, of My Supreme Will, that wants those who possess Its Goods.”

Permanent link to this article: https://bookofheaven.org/2013/12/18/how-in-the-creation-the-divinity-bilocated-its-will/