How the Divine Life has need of Nourishments in order to Grow in the creature. The creature, with her love, forms in God Himself His Divine Life.

Love is the Cradle of man.

How the Fiat Places Everything in Communication, wherever It Reigns. Example of the Spouses. The Working of the Divine Will is the Fullness of the Acts, and the Triumph of the Divine Act in the human. 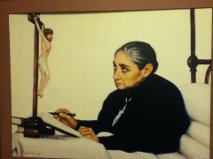 How the Fiat Places Everything in Ccommunication, wherever It Reigns.  Example of the Spouses.  The Working of the Divine Will is the Fullness of the Acts, and the Triumph of the Divine Act in the human.

I was going around in the whole Creation, to bring all created things together with me before the Supreme Majesty, as Homage, Praises, Adorations, because they are Works of His Creative Hands, worthy only of the One Who has Created them, for they are Animated by His Divine Will.  But while I was doing this, I thought to myself:  ‘Created things do not move, they stay at their place – they do not come with me; so, it is useless to say that I bring them together with me, because they do not come.’  But while I was thinking of this, my sweet Jesus came out from within my interior, and at the same time He showed me my little soul, which had many Rays centered within itself, that maintained the Communication with each Created thing, in such a way that they were in Communication with me, and I with them.  But the Main Point of Origin from which these Rays started, was God, who kept the Communications with everyone and with everything.  And my lovable Jesus told me:  “My daughter (Luisa), wherever My Divine Will Reigns with Its Light, which no one can resist because it is Immense and Penetrating, It places everything in Communication.  Each Ray starts from the Divine Center, in which My Divine Will has Its Primary Dwelling.  The Rays are nothing but the Acts which the Divine Fiat releases from Itself, which, investing each Created thing, form their life, and as many secondary dwellings in each one of them.  Now, it is natural that, for (Luisa) the soul in whom My Divine Will Reigns, as she forms her Acts in My Divine Volition, all Created things receive the Communication of that Act by Virtue of the Light that Unites them, and along the Flight of that same Light, they Unite together in order to perform the Act that soul (Luisa) does, in whom My Divine Will Reigns.  In fact, one is the Will which they possess – one is the Strength, therefore one is the Act they want to do.  It is My Divine Will Itself that moves everything, and makes the Act of one, Act of all.  Therefore, be sure that, even though Created things remain at their place, they all follow you (Luisa).  My Divine Will Itself puts them on their way to you, so that you may not be alone, but accompanied by all of them.

It happens as in a wedding:  the bride and the groom walk in the front by themselves, but behind them follows the great number of those who are invited.  You (Luisa) are the Bride with whom My Divine Will wanted to Form Its Royal Wedding; It wanted to destroy the division, the obstacles which existed between you and It, in order to Form the most Happy Couple which has ever existed.  So, these are days of Celebration for you (Luisa) and for It; your Acts Animated by the Divine Fiat are continuous Invitations that you (Luisa) make to all the things that came out of Our Creative Hands.  Therefore your Invitation is extremely vast, and there is no one who can do without accepting, because it is a Divine Will that Calls all of Its Works to Its Banquet, excluding not even My Celestial Mama; and all feel Honored and Triumphant in attending the Wedding and in participating in the Nuptial Banquet of this Supreme Will of Mine.  This is why they anxiously await your Acts, your Invitations, your Calls, to come and sit at the Banquet and Celebrate the two spouses.  Therefore, you (Luisa), go ahead together with My Divine Will before the Supreme Majesty – My Works follow you behind.  And this happens with Justice, because in Creating all things, it is to the creature that We gave Supremacy over all Our Works – that is, to the creature in whom Our Divine Fiat was to Reign fully, not to the creature degraded by her will.  This one is the last among all, and has no right, nor communication; while the creature in whom My Divine Will Reigns, has the Right to be the First one to call everyone, and to be followed by everyone.

Therefore, Operating in My Divine Will is the Greatest Miracle, and the Fullness of all Acts United together, and the Triumph of the Divine Act in the human act, because My Divine Will was as though sterile in the midst of creatures, and It is now made Happy by Its First Daughter, in whom It sees Its many Newborns who will come to Light.  So, It will no longer live as a sterile mother in the midst of the people, but as a Mother Fecund with many children.  It used to be a widow, because in Creating the first man (Adam) It Espoused the human nature, Dowering it with the Immense Riches of Its Divine Will, as the Seal of the Marriage It formed with man.  As he (Adam) withdrew from It, It remained a Widow for many centuries; but now It has removed the mourning of Its Widowhood, and Marrying again, It has taken Its Garments of Bride and has released Its Dowries into the Field, once again – and the Seal of the Dowries are the Knowledges about It, through which It offers the Gift of the Riches It Possesses.  Therefore, My daughter (Luisa), be attentive in preserving your Garments of Bride, and in enjoying the Dominions that My Divine Will has given you (Luisa) as Dowry.”

Permanent link to this article: https://bookofheaven.org/2014/02/15/how-the-fiat-places-everything-in-ccommunication-wherever-it-reigns-example-of-the-spouses-the-working-of-the-divine-will-is-the-fullness-of-the-acts-and-the-triumph-of-the-divine-act-in-the-hum/