MAY, THE MONTH OF OUR BLESSED MOTHER 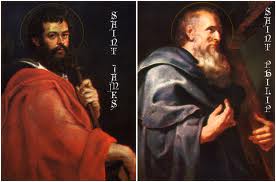 The Apostle Philip was one of Christ’s first disciples, called soon after his Master’s baptism in the Jordan. The fourth Gospel gives the following detail: “The next day Jesus was about to leave for Galilee, and He found Philip. And Jesus said to him: Follow Me. Now Philip was from Bethsaida, the town of Andrew and Peter. Philip found Nathanael, and said to him: We have found Him of whom Moses in the Law and the Prophets wrote, Jesus the Son of Joseph of Nazareth. And Nathanael said to him: Can anything good come out of Nazareth? Philip said to him: Come and see” (John 1:43ff). — The Church’s Year of Grace, Pius Parsch

St. James the Less, a brother of the Apostle Jude, was of Cana of Galilee. He is the author of one of the Catholic Epistles in the New Testament. He was favored by an appearance of the Risen Christ (I Cor. 15:7). After the dispersion of the Apostles he was made Bishop of Jerusalem. He was visited by St. Paul (Gal. 1:19). He spoke after Peter at the meeting of the Apostles (Acts 15:13). When he refused to deny the Divinity of Christ, the Jews cast him down from the terrace of the temple and clubbed him to death. The Breviary contains a very moving description of his death. “When he was ninety-six years old and had governed the Church for thirty years in a most holy manner, the Jews sought to stone him, then took him to the pinnacle of the temple and cast him off headlong. As he lay there half dead, with legs broken by the fall, he lifted his hands toward heaven and prayed to God for the salvation of his enemies, saying: Lord, forgive them for they know not what they do! While the apostle was still praying, a fuller struck his head a mortal blow.” His relics now rest next to those of St. Philip in the church of the Holy Apostles in Rome, and their names are mentioned in the first list in the Canon of the Mass.

Excerpted from The Church’s Year of Grace, Pius Parsch

Permanent link to this article: https://bookofheaven.org/2014/05/03/feast-of-saints-philip-and-james-apostles/