QUOTES FROM POPES JPII AND BENEDICT XVI ON EUCHARISTIC ADORATION 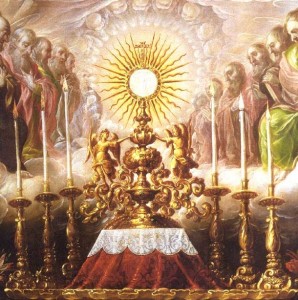 Adoro te devote, latens Deitas — “Hidden God, I devoutly adore you” — is the first line of the famous eucharistic hymn at­tributed to St. Thomas Aquinas. Jesus promised: “I will remain with you always” (Matt. 28:20), but he does so hidden behind the disguise of transubstantiated bread.
We see Christ’s humility in this hiddenness. It was part of God’s plan that Jesus, like every child, remain hidden in his mother’s womb for nine months. As he grew up in Nazareth and worked there as a carpenter, his divinity lay hidden until at age thirty he began his public life of preaching and healing. “The humility of Jesus: in Bethlehem, in Nazareth, on Calvary. But still more humiliation and more self-abasement in the most sacred host — more than in the stable, more than in Nazareth, more than on the Cross.”
In the Blessed Eucharist our senses are unable to perceive the Real Presence. We look at Jesus present in the tabernacle, perhaps just a few yards away, and we tell him that we know, through faith, that he is present — the same Jesus who was born in Bethlehem and grew up in Nazareth; the same Jesus who rose from the dead, ascended into heaven, and is now seated at the right hand of the Father.
St. John describes a very moving scene after the Resurrec­tion when Thomas, after refusing to believe the testimony of the other Apostles, is confronted by the Risen Christ who elic­its a deep act of faith from Thomas. He said to him, “Put your finger here and see my hands; and put out your hand and place it in my side; do not be faithless but believing” (John 20:27). Thomas responded immediately, “My Lord, and my God,” ex­pressing his faith in the Risen One. Our Lord replies, “Have you believed because you have seen me? Blessed are those who have not seen and yet believe” (John 20:28–29).
Jesus uses the occasion to emphasize that faith is a virtue that allows us to accept a truth that is a mystery, and that this is a blessed thing to do. He wants our faith to be manifest before the tabernacle, in our thoughts and words. “Build a gigantic faith in the Holy Eucharist. Be filled with wonder before this ineffable reality. We have God with us; we can receive him ev­ery day and, if we want to, we can speak intimately with him, just as we talk with a friend, as we talk with a brother, as we talk with a father, as we talk with Love itself.”
St. Teresa of Avila wrote that when she heard the people say they wished they had lived when Christ walked on the earth, she would smile to herself, for she knew that we have him as truly with us in the Blessed Sacrament as people had him then, and wonder what more they could possibly want.
And the holy Curé of Ars points out that our fortune is even greater than that of the people who lived with Christ during his life on earth, because they sometimes had to walk for hours or for days to find him, whilst we have him so close to us in every tabernacle. “He is there as though behind a wall and from there he looks at us as though from behind the lattice (cf. Song 2:9). Even though we cannot see him he looks at us from that place where he is truly present, so that we may possess him, even though he conceals himself in order that we may seek him out. Until such time as we reach our celestial home, Jesus wants to surrender himself entirely to us, and to live united to us in this way.”

Permanent link to this article: https://bookofheaven.org/2014/05/04/eucharistic-adoration-hidden-god/