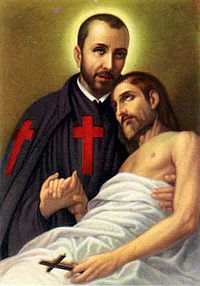 The story and history of Saint Camillus Of Lellis. The early years of Camillus gave no sign of sanctity. At the age of nineteen he took service with his father, an Italian noble, against the Turks, and after four years’ hard campaigning found himself, through his violent temper, reckless habits, and inveterate passion for gambling, a discharged soldier, and in such straitened circumstances that he was obliged to work as a laborer on a Capuchin convent which was then building. A few words from a Capuchin friar brought about his conversion, and he resolved to become a religious. Thrice he entered the Capuchin novitiate, but each time an obstinate wound in his leg forced him to leave. He repaired to Rome for medical treatment, and there took St. Philip as his confessor, and entered the hospital of St. Giacomo, of which he became in time the superintendent. The carelessness of the paid chaplains and nurses towards the suffering patients now inspired him with the thought of founding a congregation to minister to their wants. With this end he was ordained priest, and in 1586 his community of the Servants of the Sick was confirmed by the Pope. Its usefulness was soon felt, not only in hospitals, but in private houses. Summoned at every hour of the day and night, the devotion of Camillus never grew cold. With a woman’s tenderness he attended to the needs of his patients. He wept with them, consoled them, and prayed with them. He knew miraculously the state of their souls; and St. Philip saw angels whispering to two Servants of the Sick who were consoling a dying person. One day a sick man said to the Saint, “Father, may I beg you to make up my bed? it is very hard.” Camillus replied, “God forgive you, brother! You beg me! Don’t you know yet that you are to command me, for I am your servant and slave.” “Would to God,” he would cry, “that in the hour of my death one sigh or one blessing of these poor creatures might fall upon me!” His prayer was heard. He was granted the same consolations in his last hour which he had so often procured for others. In the year 1614 he died with the full use of his faculties, after two weeks’ saintly preparation, as the priest was reciting the words of the ritual, “May Jesus Christ appear to thee with a mild and joyful countenance!”

Camillus was beatified by Pope Benedict XIV in the year 1742, and canonized by him four years later in 1746.

Popularly, Camillus is the patron saint of the sick, hospitals, nurses and physicians. His assistance is also invoked against gambling.

His mortal remains are located in the altar in the Church of St. Mary Magdalene in Rome, along with several of his relics. Also on display is the Cross which allegedly spoke to Camillus, and asked him, “Why are you afraid? Do you not realize that this is not your work but mine?” which has become the motto associated with St. Camillus, as well as healthcare workers who were inspired by him.

St. Camillus’ feast day was originally inserted in the General Roman Calendar in 1762 for celebration on 18 July, since 14 July, the day of his death, was at that time taken by the feast of Saint Bonaventure. It was then given the rank of Double, later it was changed in 1960 to that of “Third-Class Feast”[5] and in the liturgical changes of 1969 to that of an obligatory “Memorial“, when it was also moved to the anniversary of his death, 14 July. In the U.S.A. it is currently an optional Memorial celebrated on 18 July, because on 14 July there is the obligatory Memorial of St. Kateri Tekakwitha.

Permanent link to this article: https://bookofheaven.org/2014/07/18/feast-day-of-saint-camillus-of-lellis/